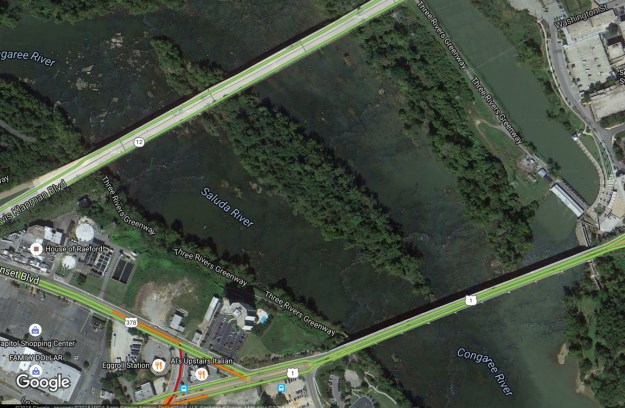 Look at those beautiful green lines of flowing traffic!

The story on the front page of The State about flood-related traffic jams seemed a bit out of sync to me (although I understand plenty of others continue to have trouble), because I read it right after my easiest crossing of the river since the floods.

Opening Jarvis Klapman really made a huge difference. I left the house worried that I was going to be late because I had less than an hour to get downtown… and it was a breeze. I couldn’t believe how well things were flowing on Sunset, until I saw the reason why — cars whizzing overhead on the Jarvis Klapman overpass.

You really don’t appreciate a simple thing like having a 15-20-minute commute until you lose it for a few days. And I would never have thought that closing Jarvis Klapman — which is never particularly crowded — would turn Gervais, Meeting, Sunset, Knox Abbott and Blossom into parking lots at rush hour.

How are y’all’s traffic situations going?

42 thoughts on “Hurrah for Jarvis Klapman!”