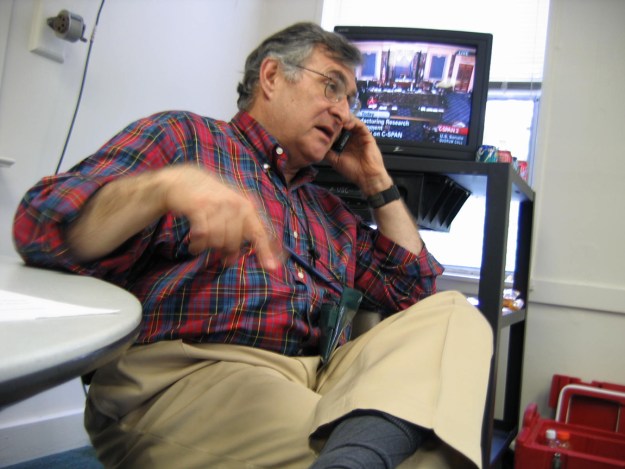 File photo: Samuel Tenenbaum at the HQ of Columbia’s operation to help Katrina evacuees in 2005.

Concerned about this Facebook message from Inez Tenenbaum, as of Monday evening:

Our home on the Saluda River is flooded and the renovations will probably take six weeks or more. If any of my Facebook friends know of a place we can rent (with two dogs and four cats) please let me know! Thanks so much.

I called and talked with Samuel. I knew how close their house was to the river. You know those pictures I keep showing of the pool and tennis courts at Quail Hollow? They’re like that close — although the house is on stilts.

Samuel says they’re doing OK. They’re in a Quality Inn Suites in Lexington that takes pets, which I found amazing. There are plenty of other flooded-out folks with pets staying there. The dogs are with them. The cats, who as we know fend for themselves, are back at the house with plenty of food — and Samuel is anxious to get back to check on them.

They evacuated on Sunday, just minutes before the Lake Murray floodgates were opened. Good call, since they are very close to the dam — they live in a rural area off Corley Mill Road.

There was already five feet of water in their driveway — not from the river, but from nearby creeks feeding into it. The water was moving too swiftly for a boat to come alongside to pick them up, so Samuel put Inez and the dogs into a kayak and pulled them, wading through the water himself. He told himself while doing so that any snakes in the water had already had the sense to abandon the area.

“Now I know what it’s like to be homeless,” he said — if only temporarily.

This is especially ironic because Samuel ran Columbia’s response to Hurricane Katrina 10 years back, heading up the operation to accommodate refugees from that disaster.

As he sees it, he’s following that protocol: “We established the plan 10 years ago. We put people in motels.” And that’s where he, Inez and the dogs are.

As for longer-term rental accommodations, the Tenenbaums have a line on a couple of places, although nothing is set in stone. So pass on any tips you have…

7 thoughts on “Tenenbaums find refuge at hotel in Lexington”