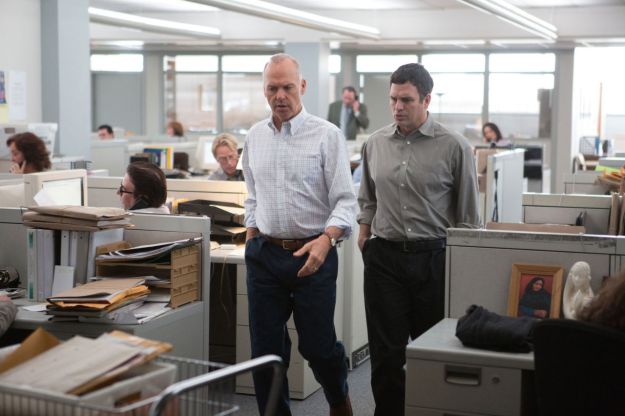 Look! Journalists walking through a newsroom — and it’s not deserted!

I was interested in seeing “Spotlight” because I’d heard it was the best newspaper movie since “All the President’s Men.”

That’s a high bar. I recently watched it again and was surprised how well it held up. I went to see it at the time because it was topical, and because Woodward and Bernstein were heroes to my generation of journalists. I was really startled at how good it was, independent of all that, going on 40 years later.

And I’ve seen Michael Keaton in a good newspaper movie before. I really identified with his character in “The Paper.” Of course, that was largely played for laughs, making it nothing like this film, which I’m anticipating being rather grim.

So, wanting to see it anyway, I was pleased to get an invitation to come watch it at the Nickelodeon tonight, and then participate in a panel discussion with Charles Bierbauer and Sammy Fretwell.

Y’all should come. The movie starts at 6:30 p.m., and the discussion follows.

The folks at the Nick asked me how I wanted to be billed on the website. I said, “Given the subject, I guess you could call me a 35-year veteran newspaper editor who is also a Catholic.” Which they did.

7 thoughts on “Come see ‘Spotlight’ tonight at the Nickelodeon”