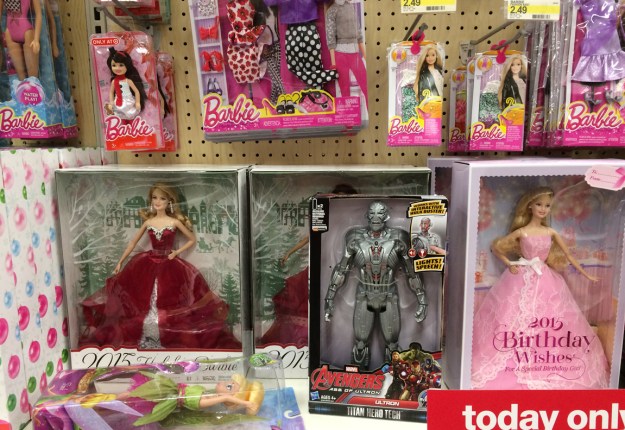 In another context, his stance might look menacing. Here, he seems mortified…

Forget about separate bathrooms; there is no more dramatic separation between the sexes than the stark contrast between the store aisles devoted to items marketed to boys and those aimed at girls.

The “boys'” aisles are filled with menacing things that shoot, crash, kick, punch or snarl, and the dominant colors are not baby boy blue, but black and brown, relieved only by blood red, ninja turtle green and sometimes alarming orange.

And the “girls'” aisles are, well, pink. That’s about all you can see at a distance, and sometimes close up. So much pink that I still feel an aversion to walking down them, like there is still a trace of Wally and the Beave in me, thinking, “Aw, Mom! Don’t make me go there! What if one of the guys sees me! He’ll give me the business!”

And anyway, we try hard to find more neutral things for our granddaughters — building sets, puzzles, games — something less frou-frou at the very least. There are such things still to be found, for girls and boys, and they are only occasionally to be found floating in the sea of pink.

And when you find something that doesn’t belong there, boy does it stick out. Like “Ultron” above, which I found amid the pink at Target, no doubt left by some kid whose parents said, “Put that down; we’re shopping for your sister.” (Or maybe the sister wanted it, and her parents preferred to buy her something more “suitable.” I don’t know…) 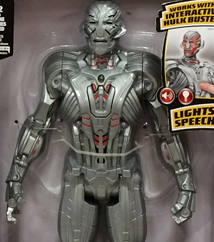 How did I get here? I’m not touching anything!

I like Ultron’s stance in the photo. With his shoulders hunched up toward his ears (or where ears would be if he had any) and his arms hanging in a way that suggests a reluctance to touch anything, and that mechanical grimace, he looks terribly awkward and embarrassed, as though he had accidentally gone clanking into the women’s bathroom. He seems to be thinking, “Get me outta here before the Avengers see me! They’ll give me the business!”

Well, it just serves him right for being such a testosterone-fueled bully who wants to dominate the world. Maybe in the future he’ll remember to check his privilege before barging in among all these lady dolls…

79 thoughts on “The extreme embarrassment of Ultron”