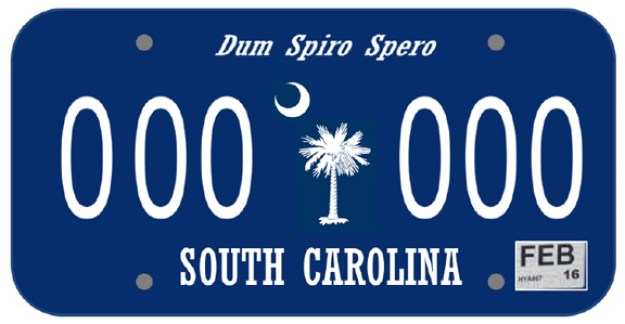 Is this beautiful or what? Has South Carolina ever had a license plate that looked this good? If our state leaders had the good sense to adopt it, could you ever imagine us wanting to change the design again? I can’t.

Thank our own Mark Stewart for putting the image together, based on a conversation he and I had on an earlier post.

Reacting to the blah new design we’ll have to start putting on our cars next year (it lacks lust; it’s so lackluster), Mark said:

I see they are still designing license plates by committee over at the DMV. Another dreadful effort is on display here. Better than last year’s; but that isn’t saying much as those were clearly DOA.

When you have a flag like SC’s for inspiration, how hard is it to bollocks it up?

I know! We need a dark blue plate with white letters and a white Palmetto tree and crescent moon in the center. How complicated is that? It would be beautiful, and we would never need a redesign, because it couldn’t be improved upon…

I have a lot of respect for states like New Jersey, who have a simple design and just stick with it. You can tell a NJ plate at quite a distance.

I want a plate like that, only beautiful. The flag design is the way to go.

Anyway, we riffed back and forth on the subject for a few more comments, and then Mark, fired up, went and created the above.

Isn’t it gorgeous? If only we could adopt this plate, we’d never need another. It would be impossible to improve upon.

If I were to make any change at all, I might make the blue just a tad darker. But I’d also be satisfied with it just as it is…

30 thoughts on “Here it is: The last license plate South Carolina will ever need”