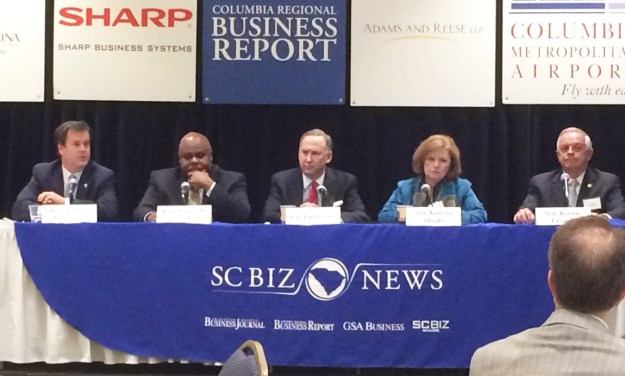 This morning, ADCO had a table at the latest Columbia Regional Business Report’s Power Breakfast. This one was about looking ahead to the coming legislative session, and featured a panel of lawmakers — Reps. Nathan Ballentine and Joe Neal, and Sens. Joel Lourie, Katrina Shealy and Ronnie Cromer.

(Bryan Caskey joined me at the ADCO table, along with several other representatives of local law firms whom I invited.)

The nice thing about “covering” these events is that if I just wait a few hours, CRBR will put up its own report that gives you the basics and saves me from a lot of typing. An excerpt:

Next year’s legislative session will be a failure if not remembered for collaboration across party lines, state lawmakers said today.

Legislators from both sides of the aisle urged to see similar cooperation next year from the General Assembly as it did in the aftermath of the Emanuel AME tragedy. The give-and-take between Democrats and Republicans will be vital if the state hopes to finally fix crumbling infrastructure, they said during the Columbia Regional Business Report’s quarterly “Power Breakfast” networking event at the Columbia Marriott.

“I think 2016, more than anything else is going to be known as the year that we either came up with an idea to fund our infrastructure and do it in the right manner,” said Sen. Ronnie Cromer, R-Newberry, “or it’s going to be known as the year we failed the people of South Carolina. Because we couldn’t put some plan together to fund our roads and bridges.”

Rep. Nathan Ballentine, R-Chapin, knows it can be easy to assume collaboration as part of the General Assembly’s supermajority. But he still saw it at work when his colleagues voted to remove the Confederate Flag from the Statehouse grounds in July and expects to see more of it again next year, this time without tragedy serving as a catalyst….

And that pretty much states it. There was an air of cautious optimism that maybe, just maybe — after the miracle they experienced together over the summer (achieving near-unanimity on an issue that had previously been too controversial even to bring up), that goodwill could be channeled productively on other fronts.

Of course, the usual differences were on display — the three Republicans tended to think in terms of coming together over infrastructure; the two Democrats wanted to see some Republicans agreeing with them on Medicaid expansion. But there was also agreement on some key issues — Democrats agreed infrastructure must be dealt with, and both sides acknowledged that the state Supreme Court’s instructions to improve educational opportunity in poor, rural districts must be meaningfully addressed as well.

Beyond that, here are some Tweets that give you the flavor of the session:

Sen. Joel Lourie on Trump-style rhetoric: “We saw enough hate in Charleston to last us a lifetime…”

Rep. Joe Neal: After SC came together over Mother Emanuel, what next?

Neal: We need to UPGRADE our infrastructure, not just restore it to pre-flood condition…

Neal: Real test for SC is whether we upgrade our HUMAN infrastructure, meaningfully addressing healthcare and education…

Rep. Nathan Ballentine says he’s there to represent whole state’s interests, not just his district’s. Good for him…

Sen. Katrina Shealy says we’ve got to take care of children in poor districts just as we do in her Lexington County district…

Sen. Shealy says her “Odd Couple” partner Joel Lourie is deserting her, “so I need to find another odd person…” Lourie takes it well…

Sen. Lourie: Legislature entered a new world in June; mentions how proud he is of @nikkihaley‘s leadership at that time…

One thought on “Lawmakers hope to see more cooperation, building upon the summer”