When I saw the email from Netflix headlined “Brad, we just added a movie you might like,” I braced myself. Netflix chirpily announcing it has something I will like gives me the same creeping feeling that Arthur Dent got when the Syrius Cybernetics Corporation’s Nutrimatic drinks dispenser offered him another cup of liquid that was almost, but not quite, entirely unlike tea.

And sure enough, here’s what it was offering me: 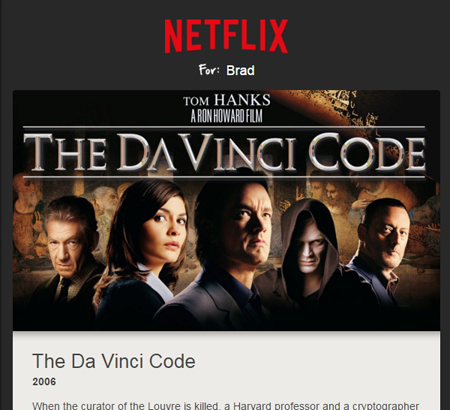 Don’t know about you, but I consider that to be one of the silliest, most ridiculously hyped films of the past decade. It easily qualifies as my least favorite Ron Howard film, and I suppose my least favorite featuring Tom Hanks as well.

It was like a cheesy retelling of Umberto Eco’s Foucault’s Pendulum, and I didn’t like that, either. There are people who just eat up a tale involving a conspiracy stretching over thousands of years, especially when it involves the Knights Templar (as both tales do). I’m not one of them. I’m not a huge fan of the whole paranoia thriller genre to begin with, and when you stretch it to such extremes, you totally lose me.

And don’t even bother feeding me a tale about brilliant algorithms duplicating the human mind and taking over the world. When Netflix gets a clue as to what I like, then I’ll worry…

25 thoughts on “A film almost, but not quite, entirely unlike anything that appeals to me”