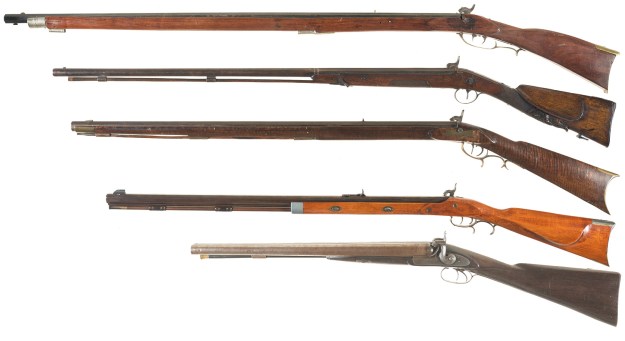 The assault weapons of the time when the 2nd Amendment was adopted. If you were really good, you might have been able to fire one or two rounds a minute.

Last night during the debate, I Tweeted:

No, Jeb. It is not the first impulse of POTUS to “take guns away from law-abiding people.” That can’t be supported…

This led to a brief back-and-forth with Bryan Caskey about whether that was true or not. Eventually I urged him to send me evidence supporting his position after the debate. Today, he obliged…

You asked for the evidence. Okay, here it is:

First, let’s understand what the Australia policy actually is. Just so we’re clear, the “Austraila Policy” is not just an optional buy-back of guns. It’s a MANDATORY (as in required by law, or else you’re committing a crime) buy-back program for a lot of guns, and it’s an outright ban on semiautomatic and self-loading rifles and shotguns, and all handguns. All. Oh, you want one? Well then mate, you have to show up to the government of Australia and show a “genuine reason” for wanting to own a gun, and guess what, the reason of “self-defense” isn’t a valid reason.

When has Obama touted this super-duper policy? What evidence is there? Well, here are three times he said praised this gun control system. Submitted for your approval…

1. June 10, 2014: “Couple of decades ago, Australia had a mass shooting, similar to Columbine or Newtown. And Australia just said, well, that’s it, we’re not doing, we’re not seeing that again, and basically imposed very severe, tough gun laws, and they haven’t had a mass shooting since. Our levels of gun violence are off the charts. There’s no advanced, developed country that would put up with this.” …

2. June 22, 2015: “When Australia had a mass killing … it was just so shocking to the system, the entire country said ‘well we’re going to completely change our gun laws’ and they did, and it hasn’t happened since,” Obama said.

3. October 1, 2015: “We know that other countries, in response to one mass shooting, have been able to craft laws that almost eliminate mass shootings.  Friends of ours, allies of ours — Great Britain, Australia, countries like ours.  So we know there are ways to prevent it.”

Here’s the thing. You just can’t tout Australia’s gun laws without touting the mass confiscation program which is the heart of it. So when Obama says we should look to respond to shootings as Australia did, he’s not talking about background checks. He’s not talking about gun shows. He’s not talking about magazine limits. He means that we should ban and confiscate guns. No amount of him saying “I believe in the Second Amendment” and him smirking whiles saying “No one is coming to take away your gun” can change this. He can’t just casually bring  up countries that have confiscated firearms as some great achievement that we should look to emulate unless he really wishes to push the conversation toward confiscation.

But hey, I’m sure this guy would never try and mislead us. If you like your gun, you can keep your gun.

To which I responded…

My point was, he’s never tried to do anything like that. So it’s kind of disingenous to say that’s his default response.
I can sort of identify with Obama’s position, even though he may be, in his heart of hearts, more anti-gun than I am.
I have an ambivalence that I see in him. (And which you are HIGHLY unlikely to identify with.)
I believe that probably the ONLY thing that would significantly reduce our gun-death rate would be a radical reduction in the number of guns that exist and are in circulation. And yeah, that would mean something like Australia, or Britain.
And I think that is actually a sensible, rational response to the problem.
At the same time, I see it as completely politically impossible in this country. Not because of the 2nd Amendment — frankly, I think the most obvious interpretation of those words would be that gun ownership is protected within the context of a well-ordered militia. But the idea that it means no personal ownership of any kind of weapon should ever be abridged is SO embedded in our political culture that it’s unshakable.
So I end up feeling like there’s not really anything I can do.
And I think Obama reaches a similar conclusion, except that being the president, he doesn’t want to own up to powerlessness.
I don’t believe it EVER occurs to Obama to try to do something to “take guns from law-abiding citizens” because he’s too pragmatic to waste time on such a thought.
Where the distrust comes in is that folks on your side of the debate see that he’s someone who would LIKE the political realities to be different. But he knows they AREN’T different, and acts accordingly.
Is this making sense? As I say, I’m describing an ambivalence…

To which he responded…

I agree he’s never actually tried. Where my distrust comes from is that I don’t think he is actually letting us know what his real heart-of-hearts position is. I think (as you say) his true position is something along the lines of the Australia Model, and he knows that openly, honestly saying “Look, I believe we need to confiscate guns like they did in Australia” would be (1) political suicide; and (2) would not actually get anything done, anyway.

That’s because as you say our idea that gun ownership as a personal right (unconnected from service in a formal military unit) is “embedded in our political culture that it’s unshakable”. I agree that Obama acknowledges that reality, and that’s what really keeps him from openly saying “Here’s what I believe”. I see him as someone who will not tell us what he really wants because it’s so outside the mainstream of what is embedded in our culture.

To give you a counter-example, I give you exceedingly more credit for laying your cards on the table and saying “Here’s what I believe” than I do to Obama, who keeps trying to reassure me that he’s a big believer in the Second Amendment. Every time I hear him say “I believe in the Second Amendment”, I have a flashback to Sunday school where a teacher was telling us about believing in God, and how lots of people would say that. She would then say, “Believing in God isn’t the end of the spiritual journey, because even the Devilbelieves in God.”

You’re going to flip your lid when you read this, but I think Obama believes in the Second Amendment like the Devil believes in God.

For instance, if Scalia had a heart attack today, I believe Obama would appoint a Justice to SCOTUS tomorrow who would overturn Hellerand tell us that privately owning a firearm is contingent on military service.

I would prefer that Obama say “Look, I believe we need to confiscate guns like they did in Australia, Some of you may not agree, but that’s what I believe”, and then we can all lay our cards on the table about what we actually want. Then we can talk about what we’re all willing to do. However, it’s really hard to make a deal with someone when they won’t level with you about what their real beliefs are.