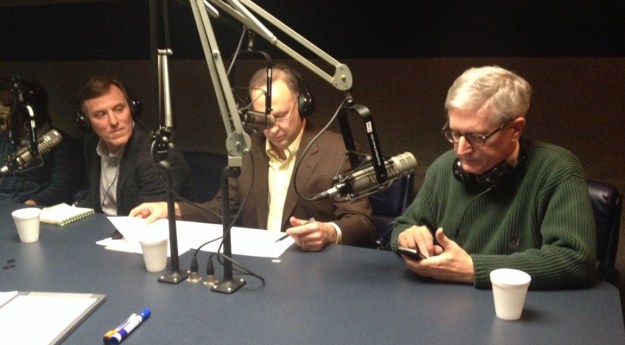 Just sharing this shot of Rep. Todd Atwater, Sen. Joel Lourie and me in the studio during Cynthia Hardy’s On Point radio show on the Big DM this evening.

Note that Todd is alert and looking around, Joel is playing the nerd studying the notes he had brought with him about the SOTU and Gov. Haley’s response, and I’m staring at my phone, probably writing this Tweet:

Which prompted Rob Godfrey from the governor’s office to respond:

Two politicians & an editorial writer? Hope it’s a 3 hour special. Otherwise we could see a 👊🏽 fight for air time. https://t.co/IlgkERC35X

Yes, this is a very self-referential blog post. But then, blogs tend to be that way as a medium — they are to journalism what selfies are to photography.

We had a good discussion, with everyone on board with agreeing with both the president and the governor in their calls for greater civility and less negativity. In fact, if our Legislature consisted entirely of Joel Louries and Todd Atwaters, we’d get a lot more done at the State House.

Not that there wasn’t sincere disagreement. Todd and Joel had a pretty good back-and-forth about Obamacare and Medicaid expansion. At one point I almost jumped in on Joel’s side, when Todd said it was a shame the president didn’t meet Republicans halfway on the issue.

Hey, I was about to say, the president and the Democrats did meet Republicans halfway and more from the get-go — before the debate on the Act was joined, before the president was even elected.

That happened when Obama didn’t run advocating for single-payer, which is the one really rational approach to healthcare. And he backed away from that in deference to the wall of Republican resistance that already existed against it. So he and the other Dems started out with a compromise position.

But then the subject changed, and we didn’t return to it. Just as well. I was being presented to listeners as the guy in the middle between Joel the Democrat and Todd the Republican, and it would have just confused everybody if I had jumped out on the one issue where I’m to the left of Bernie Sanders. That is, that’s where my position has been cast popularly — mostly by Republican resistance that has made Democrats afraid to embrace it. I don’t consider it to be to the left of anything. To me, it’s the commonsense, nonideological, pragmatic option. And a lot simpler than the ACA.

Speaking of Bernie… He and the author of Hillarycare will be on the tube in awhile, so I think I’ll stop and rest up to get ready to Tweet during that. Join me @BradWarthen if you’re so inclined.