Or one of them, anyway…

Lately, I’ve become all-too-accustomed to weighing in at over 180 (sometimes well over) on the rare occasions when I do weigh myself — at doctor’s offices, or when I’m at someone else’s home and they happen to have a scale in the bathroom.

That is not my fighting weight, not by a long shot. In fact, when last I was weighed for any sort of ritual combat — when I was on the wrestling team in high school — I was about 132. The year before that, I was in the 115 class — and just as tall as I am now. I was a scrawny kid.

But that was more than 40 years ago, and now that my uncommon genteel figgar has matured, I see my fighting weight as more in the neighborhood of the 160s. In fact, I recently decided — once again — to set my sights on being eligible to wrestle Shute. That, as I’ve mentioned before, is a “Vision Quest” reference. Awesome movie. Anyway, it means weighing in at less than 168.

So I resolved to go back on my paleo diet in the new year, and to keep myself honest, I asked for and received one of those spiffy digital bathroom scales for Christmas.

And this morning, I discovered a wonderful thing: My clothes, which I am always wearing when I step on other people’s scales, weigh a lot.

I weighed myself after showering, shaving and getting dressed — everything, including blazer, sweater, mobile phone, keys, shoes — and as is too often the case, the tally was 180.7.

But just moments before, having stripped to take my shower, I was only 172.4. Which really made those 20 minutes or so I’d just finished on the elliptical seem worthwhile.

Look how far I’ve come already! Just 4.4 more pounds, and Shute is in serious trouble! And I’ve got the whole year to do it in!

Yeah, I know. But allow me to savor this little victory… 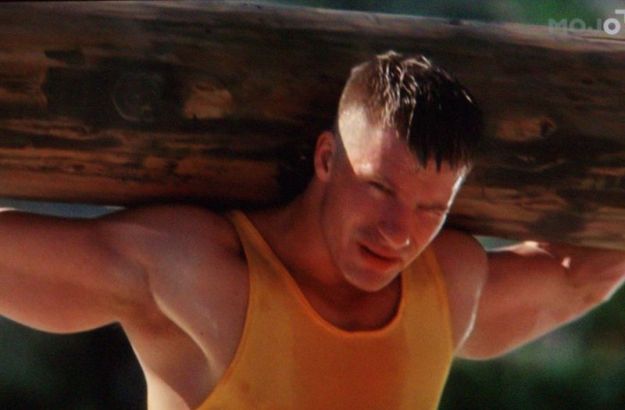 This is Shute, the guy who is in such imminent danger.