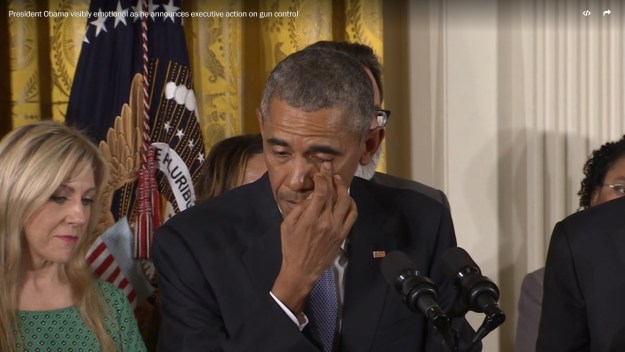 Hey, y’all! Obama’s coming to get your guns!

Of course, he’s not. The measures he announced today will do practically nothing to stem gun violence, and won’t go out and take a gun from anyone’s hands, be they warm and alive or cold and dead.

But that’s the way it will play, isn’t it? Gun rights people are sort of binary creatures. They have two modes. In one, they are happy and comfortable in their personal bunkers with several years worth of MREs, an off-the-grid power supply, and good fields of fire in every direction. And in the other, they’re screaming “OBAMA’S COMING TO GET MY GUNS!”

Except Bryan, of course.

Doubt me on this? Read the second graf of this story:

In the real world in which we live, though, there’s little the president or anyone else can do about the fact that there are so very many guns out there, and sooner or later some of them are going to be in the wrong hands. It’s an economic problem — too many unstable, violent people chasing too many guns.

And so, rather than some avenging angel who is singlehandedly going to undo the 2nd Amendment, we have a president who weeps in frustration. And grief, of course…

58 thoughts on “Obama wept: Tears of rage, tears of grief”