Everyone, that is, except me, people around my age and of course, those much younger.

And yeah, I know the ubiquity of the war experience is pretty much a cliche, but I keep getting reminded of it in ways that make the notion seem fresh.

My history classes in school never got around to the war, even when it was right there, near the end of the textbook. I always sort of figured it was a low priority for my teachers because in their minds, well, “we all lived through it, right?” So I had to read about the events that most immediately shaped the world I grew up in on my own.

In typing my mother’s childhood memoirs, I’m reminded yet again of how the war shaped the lives even of those who never went overseas.

So I know all that, and have known it since childhood, but every time I run across by-the-way mentions of the war experiences of various famous people, I’m reminded that, unlike Vietnam and definitely unlike the War on Terror, pretty much everyone who was eligible did go. 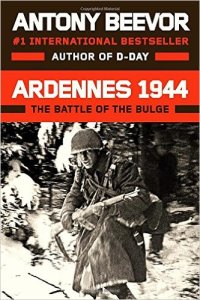 Last night, I started reading one of the books I received for Christmas, Ardennes 1944: The Battle of the Bulge, by Anthony Beevor. (It was sort of an ironic experience, opening that present and seeing on the cover the beleaguered soldier in the snow — on a Christmas Day in the 70s.)

On the second page, I had another of those “Wow, everybody was in this” experiences. The author was explaining how, in August 1944, things were still unsettled in newly liberated Paris, which is why Eisenhower was pretty much ignoring FDR’s wishes and showing support for de Gaulle, who he believed could stabilize things in his rear while his troops moved on to Germany.

Within that context, I read this, in the middle of a paragraph:

…Together with a comrade, the writer J.D. Salinger, a Counter Intelligence Corps staff sergeant with the 4th Infantry Division, had arrested a suspect in an action close to the Hôtel de Ville, only for the crowd to drag him away and beat him to death in front of their eyes….

I mean, think about it: This guy was a famous recluse my whole life. We all knew two things about Salinger: He wrote The Catcher in the Rye, and he was a recluse. You didn’t see him anywhere. And yet here he is popping up in the middle of things in Paris during the war. 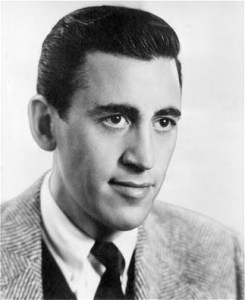 Months later, in the battle that this book is about, Kurt Vonnegut would be captured, along with my father-in-law — both soldiers in the ill-fated 106th Infantry Division, that new unit of green troops who had been placed at the center of the line, where things were supposed to be quiet.

I’m not a student of Salinger — if I were, I’d be well aware of his extensive experience in the war — but it immediately occurred to me that maybe experiences such as that one in Paris help explain why he turned into such a hermit. And sure enough, I see that he was hospitalized for a few weeks with “combat stress reaction” — although he waited until the Germans were defeated to have his breakdown.

Anyway, it’s just a small thing, a footnote, but such things interest me….

5 thoughts on “WWII: The experience that everyone shared (and yeah, I know that’s a huge cliche)”