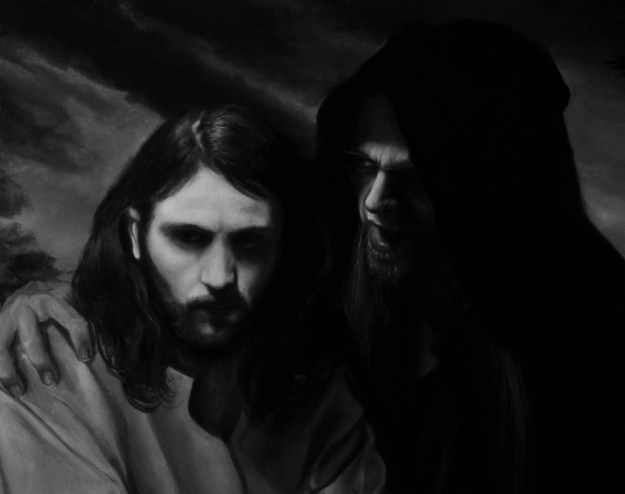 When I walked into the church last night, I was handed an Order of Worship with the above image on the front of it, and I was blown away by it.

First, it just had so much heft to it, compared to the usual clip art that appears there. It’s usually something illustrating one of the readings, and it’s generally also forgettable. At the Spanish Mass I attend most Sundays (but not last night), it tends to be an innocuous-looking line drawing featuring people who look vaguely like campesinos in some rural setting, acting out the reading. OK, but they don’t grab you.

This grabbed me. It had such immediate, powerful life to it that for an instant I thought it was a photograph (the part in Jesus’ hair is so naturalistic), then realized it was a reproduction of a painting — one that made extraordinary use of chiaroscuro. It also let me know right away that this would be the Gospel reading:

Filled with the Holy Spirit, Jesus returned from the Jordan
and was led by the Spirit into the desert for forty days,
to be tempted by the devil.
He ate nothing during those days,
and when they were over he was hungry.
The devil said to him,
“If you are the Son of God,
command this stone to become bread.”
Jesus answered him,
“It is written, One does not live on bread alone.”
Then he took him up and showed him
all the kingdoms of the world in a single instant.
The devil said to him,
“I shall give to you all this power and glory;
for it has been handed over to me,
and I may give it to whomever I wish.
All this will be yours, if you worship me.”
Jesus said to him in reply,
“It is written:
You shall worship the Lord, your God,
and him alone shall you serve.”
Then he led him to Jerusalem,
made him stand on the parapet of the temple, and said to him,
“If you are the Son of God,
throw yourself down from here, for it is written:
He will command his angels concerning you, to guard you,
and:
With their hands they will support you,
lest you dash your foot against a stone.”
Jesus said to him in reply,
“It also says,
You shall not put the Lord, your God, to the test.”
When the devil had finished every temptation,
he departed from him for a time.

I started at the image a good bit during Mass, noticing the detail. First, there was the youthful, brooding Jesus, somehow reminding me of Dostoevsky’s Raskolnikov — partly because he looked younger than usual, but then still believable for a 30-year old. He’s hungry; he’s tired, and you can see that brushing off the Tempter’s blandishments under these circumstances isn’t as easy as we might assume.

Then there’s the intensity of the Devil, who is trying to seem reasonable, but whose desperation can be seen in the tension of his fingers clutching Jesus’ shoulder in a way intended to seem amiable, avuncular, even fatherly, but which is suggestive of an animal desperate not to lose its prey. After all, for Satan, this is the Big Game, the one to pull out all the stops for. He doesn’t offer the whole world to just any victim. (It also occurred to me that this Devil was a close relative, visually, to the Emperor in “Return of the Jedi.” But I brushed that aside; I rather think the Emperor was imitating Satan rather than the other way around.)

Anyway, I later looked up the painting, and found it. It’s a recent work, painted in 2011 by Eric Armusik. And no offense meant to Mr. Armusik, but his full-color original was a disappointment after the reproduction I had seen in our order of worship. Somehow, by cropping it tightly, dumping the color and photocopying it — which made the image much darker than the original — it was made more powerful. For me, anyway.

So for this post, I grabbed a cropped-down version, got rid of the color and darkened it, recreating what I originally saw — which was an image perfect for contemplating during Lent…