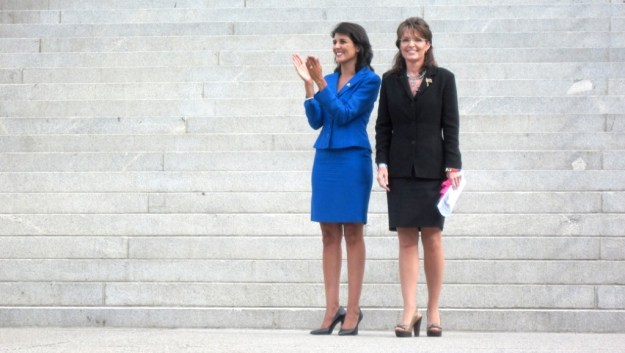 Haley back in 2010, with Sarah Palin. She’s definitely grown in office.

Nikki Haley got off the fence today and backed Marco Rubio (and not poor ol’ Jeb!) in Saturday’s primary, which goes to show how weird and volatile the Republican Party is in South Carolina these days.

Let’s step back a bit…

In 2010, Henry McMaster was the perfect Establishment candidate for governor: A Reagan man through-and-through, former party chairman, loyal backer of John McCain in 2008. But he was running in the year of the Tea Party, and he got swept aside by an inconsequential junior House member who suddenly (I had not seen these tendencies in her before) seemed to speak Tea Party as her native language.

Now, we have Henry standing beside Donald Trump and praising him in Orwellian Ministry of Truth terms (up is down; black is white; Trump is not a “bomb-thrower” or “impulsive;” and we have always been at war with Eastasia).

And Nikki Haley, who rode anti-Establishment sentiment to power, is swooping in to help the Great Establishment Hope, Marco Rubio. Yeah, back in the day Rubio was nearly as Tea Party as she was, but that is not who he is this year.

And, of course, that’s the key to why Nikki is backing him. She’s not that wide-eyed insurgent, either — to her everlasting credit. She has grown in office, and governs more and more like someone who knows what she is about. Which is why you’ll see me saying more and more good things about her, and especially about her leadership last summer.

In an earlier time, an increasingly Establishment Republican governor in South Carolina would have been backing the guy whose last name is Bush.

Carroll Campbell jumped in early for George H.W. Bush in 1988, and played a huge role in Bush winning the S.C. primary, the nomination, and the White House. I called his former chief of staff, Bob McAlister, to check my memory on that. Bob noted that the Campbell-Bush connection continues to be strong: “Iris and the boys endorsed Jeb” just the other day.

But that was then and this is now, and Rubio seems a more attractive brand for a governor asserting her Establishment bona fides.

So given who Nikki Haley is now, the direction in which she has grown, this endorsement makes perfect sense.

But don’t ask me about the McMaster/Trump thing. That doesn’t begin to make any sense…

7 thoughts on “SC upside-down: Haley for Rubio, McMaster for Trump”