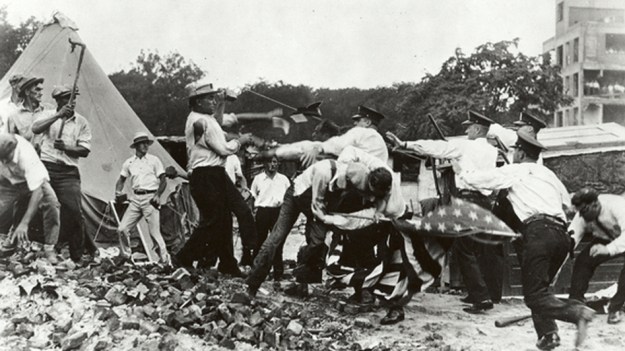 How did the nation settle for an Establishment president in the same year that the Bonus Army was marching?

I thought this passage from Yeats was appropriate four years ago. I had no idea how bad things would get:

Things fall apart; the centre cannot hold;
Mere anarchy is loosed upon the world,
The blood-dimmed tide is loosed, and everywhere
The ceremony of innocence is drowned;
The best lack all conviction, while the worst
Are full of passionate intensity…

You think the centre can hold? Tell that to Jeb Bush (and Hillary Clinton, right after New Hampshire). You don’t think the worst are full of passionate intensity? Go to a Trump rally.

Why is this happening now? Why didn’t it happen in the 1930s, when socialism and fascism were competing across the globe… everywhere but here?

If ever there was a time that faith in the center, the mainstream, might have been shaken, you’d think it would have happened then rather than now.

How was it that, in an election going on at the same time the Bonus Army was marching, the nation chose an Establishment president? And you really didn’t get much more Establishment than Roosevelt.

Was FDR just that gifted and charismatic a leader? I mean, I think he was a lot of it. His ability to inspire and encourage the nation was amazing.

Why are civil, thoughtful, calm people swept aside in favor of blustering bullies? As I’ve said before, Trump and to a great extent Cruz behave in ways that most civilized people teach their children not to act. It remains beyond my understanding that any adult could look at these guys and think, This is my leader; this is the one I want.

True, the center is singularly lacking in charismatic figures. There is no FDR, no Lincoln, to pull the country together.

And if that lack is the answer, then our current situation is a great argument for the Great Man theory of history…