On the day after Donald Trump and Hillary Clinton moved huge strides toward victory, those who beheld the scene seem transfixed by the eloquence of Chris Christie’s eyes as he contemplated what had come to pass. 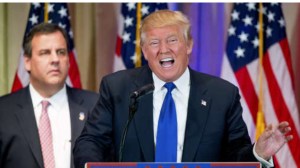 In various forms, the image of Christie standing, horror-struck, behind Trump in his moment of victory appeared with no fewer than five separate stories about Super Tuesday in my Washington Post app this morning. Two Post writers — Janell Ross and Alexandra Petri — devoted entire columns to the sight.

The Ross piece, actually, was less a column and more a recitation of ways that Twitter reacted to Christie’s silent performance.

Ms. Petri, as is her wont, got more creative, employing a battalion of pop-culture references to explain the look on the New Jersey governor’s face. I definitely recommend you go read it:

Chris Christie spent the entire speech screaming wordlessly. I have never seen someone scream so loudly without using his mouth before. It would have been remarkable if it had not been so terrifying. 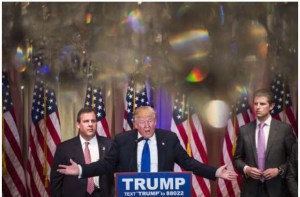 Sometimes, at night, do you still hear them, Clarice? The screaming of the Christies?

His were the eyes of a man who has gazed into the abyss, and the abyss gazed back, and then he endorsed the abyss.

It was not a thousand-yard stare. That would understate the vast and impenetrable distance it encompassed.

He looked as if he had seen a ghost and the ghost had made him watch Mufasa die again….

This is his life now.

Soon he must return to the plane onto which Trump humiliatingly sent him before. Soon he must return to the small cupboard under the stairs where he is kept and occasionally thrown small slivers of metaphorical raw meat. When he asked to be part of Trump’s cabinet he never thought to specify “presidential cabinet, of course, not a literal cabinet underground where the ventilation is poor and there is no light.” It just did not occur to him. Why would it?…

And so forth. As I said, go read the whole thing — I’ve probably exceeded the fuzzy bounds of Fair Use already. And I hope I’ll be forgiven for the image screengrabs. I just wanted to illustrate my point about how many times the image was repeated — all five came from the WashPost app this morning.

Somehow, she managed to avoid Heart of Darkness. Perhaps that’s because she wasn’t born yet when “Apocalypse Now” came out — in fact, it preceded her by about nine years. I had to look up “watch Mufasa die” to realize it was from “The Lion King,” whereas it came out when she was about 6, and therefore made a big impression. 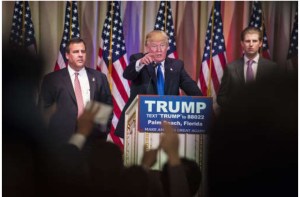 Looking at him, I was reminded of something I learned from my spotty career as an amateur actor — that the hardest thing for an actor is figuring out what to do on stage when someone else is speaking lines. What do you do with your hands? What should your face be doing? You need to keep acting, but not upstage the person speaking. It’s hard.

But you know what? It was worse than that. In the video below, you see and hear what Christie said to the crowd before Trump came out. And it’s incredible. Here he is speaking the lines, but doing so like a man with a gun to his head, like a POW blinking Morse code in the video, imploring the folks on the homefront to realize he doesn’t mean a word of what he’s saying.

He doesn’t even try to look happy. Which, of course, he isn’t…

12 thoughts on “The man who was once Chris Christie stares out from the heart of darkness. The horror… the horror…”