We’ve spoken before about the undertones of fascism in the appeal of Donald Trump. (Or maybe I just Tweeted about it; I’m not immediately finding the previous reference.)

Now there’s this, which somehow I missed over the weekend and didn’t see until today.

From the latest column by Dana Milbank:

So it has come to this: The front-runner for the Republican presidential nomination, at a campaign rally Saturday in Orlando, leading supporters in what looked very much like a fascist salute.

“Can I have a pledge? A swearing?” Trump asked, raising his right hand and directing his followers to do the same. He then led them in pledging allegiance — not to the flag but to Trump, for which they stand and for whom they vowed to vote. 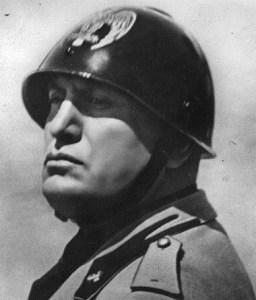 Among those not engaging in such ominous imagery were the demonstrators, who, by my colleague Jenna Johnson’s account, interrupted Trump’s event more than a dozen times. The candidate watched a supporter grab and attempt to tackle protesters, at least one of them black, near the stage. “You know, we have a divided country, folks,” Trump said. “We have a terrible president who happens to be African American.”

Loaded imagery, violence against dissenters and a racial attack on the president: It’s all in a day’s work for Trump….

If you watch that video and let it go on to autoplay the next one, you’ll hear the bit that goes, “We have a terrible president who happens to be African American.” You don’t want to miss that one, either.

Yeah, he’s a buffoon. But so was Mussolini. Hitler, too, but I think the Mussolini comparison is more apt. All that comic-opera strutting and mugging…