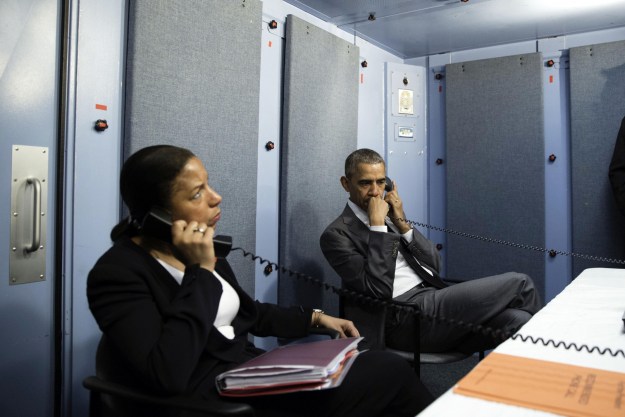 The White House was probably trying to assure us that, even though he’s very busy doing photo ops in Cuba, he’s really staying on top of the Brussels situation.

So we have this official photo showing POTUS in a (presumably, going by the riveted door and sound-absorbing panels) secure room at the residence of the U.S. chief of mission, with this cutline:

President Barack Obama and National Security Advisor Susan E. Rice talk on the phone with Homeland Security Advisor Lisa Monaco to receive an update on a terrorist attack in Brussels, Belgium. The President made the call from the residence of the U.S. Chief of Mission in Havana, Cuba, March 22, 2016. (Official White House Photo by Pete Souza)

But ya know, I’m not much assured. Not because the president’s looking all tense and worried, but because of the person sitting at his right hand.

I still get a little chill down my spine whenever I’m reminded that Susan Rice is the president’s national security advisor. That’s because I learned way more than I wanted to know about her back when she was floated as possible secretary of state. And almost everything I learned worried me.

Not just because her misspeaking got the ball rolling on the GOP’s Benghazi fixation, but because incident after incident in her history showed a lack of judgment and reliability — in Rwanda, and other places. Such as Sierra Leone.

Ours is a vast and resource-rich nation. We have loads and loads of really smart people, in academia, in government, at think tanks, in multinational corporations — people with great track records in dealing with a complicated world. Is Susan Rice, who has so many questionable items in her record, from the deadly serious to the trivial, really the best person in the nation to be at the president’s right hand in a crisis?

That seems doubtful to me…

15 thoughts on “I’m sorry, but this photo does not inspire confidence”