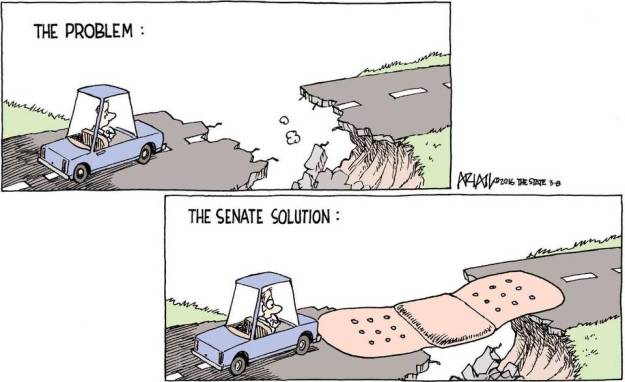 I understand from various sources that the Senate today is debating, and plans to vote on, the “roads plan” that I excoriated last week. Here’s hoping it’s not going well.

As Cindi wrote the other day, the GOP proposal has its good parts, including real reform in governance of DOT. But it also contains an absolute dealbreaker, ladies:

If the legislation skipped over Section 4, Gov. Nikki Haley would be correct to say it’s “exactly what we need.” We would have the reform we need, and the Legislature could devote some one-time money to roads again this year and adopt a long-term funding plan next year that befits the reformed Transportation Department.

Unfortunately, it doesn’t skip Section 4, which commits not just this General Assembly but every General Assembly in perpetuity to siphoning $400 million out of our state’s general budget fund and giving it to the Transportation Department.

The result is a bill that promises to break trust with the voters and strangle out other state obligations and, at bottom, isn’t worth the paper it’s written on.

For as long as we have been paving roads, we have collected a gas tax and driver fees to build and maintain those roads, on the theory that people inside and outside of South Carolina who use our roads the most should pay the most for them.

We have collected sales and income taxes to pay for our schools and courts and state police and child protection and economic development and environmental protection and most other state services.

The Senate plan changes that, dramatically. It diverts $400 million in sales and income taxes — more than 5 percent of the state budget — to pay for roads. That means we have $400 million less — not just next year but every year going forward — to pay teacher salaries, including extra pay to reward and attract the best teachers for the neediest students, to pay cities and counties for holding elections and performing other duties the state requires them to perform, to hire caseworkers to protect vulnerable children from abusive parents, to employ the judges who lock up the bad guys and the prison guards who keep the bad guys from escaping and the scientists who test our water to make sure it’s safe to drink, and everything else.

The roads diversion breaks trust with voters, in much the same way lawmakers do when they raid trust funds….

Make no mistake: A proper roads bill includes both proper reform and a gas tax increase. And it most assuredly does not include an open-ended raid on the funding for everything else the state of South Carolina does.

If Harvey Peeler manages to ram through this awful mess today, it will be up to the House to kill it. And Speaker Jay Lucas said it best last week:

“For 323 days, the Senate has had every opportunity to show leadership and propose a real, long-term solution for road repair in South Carolina. The current Senate amendment simply kicks the can further down the road and frankly, into a pothole. The General Assembly has been using general fund dollars to slap a band-aid on roads for years with very little to show for it. I urge the Senate to give this issue the attention that it requires and rally around a proposal with a long-term solution that keeps our families safe and our economy thriving.”