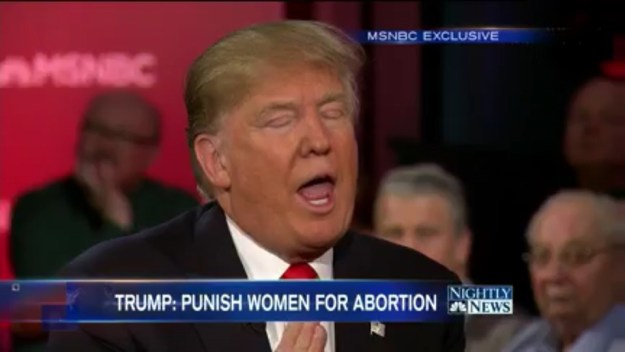 Donald Trump, engaged in what passes for ‘thought’ with him.

Donald Trump outdid himself yesterday, managing to alienate everyone on both sides of the abortion divide with his utter malevolent cluelessness:

APPLETON, Wis. — Republican presidential candidate Donald Trump came under fire Wednesday for saying that women should be subject to “some sort of punishment” for undergoing illegal abortions, a position that antiabortion and abortion rights groups alike emphatically denounced….

This prompted plenty of comments to the effect that Trump had evidently not thought carefully about the issue — which would mean that he has treated this issue the way he treats all others.

Say “Donald Trump thinking about issues,” and I picture a flat rock skipping across a pond before it runs out of momentum and eventually sinks to the bottom. Trump is the rock, in case the metaphor is too complex for you.

I would take it another step, though, in this case. I think what he said reflects that, to the extent he’s thought about the issue at all, he still holds a view (left over from his “very pro-choice” days, back when that was more convenient for him) of us pro-lifers propagated by those who oppose us: That our opposition to abortion arises not out of a concern for the unborn life, but from a hostility to women and their interests.

To the extent that something one would characterize as “thought” passed through Trump’s mind before he spoke in response to prompting from his interviewer, it seems to have been along these lines: “This is the way those pro-lifers think, so since I’m pretending to be one of them, I’ll say that.”

Mixed in with that, we should probably take into account his general preference for sounding “tough,” whatever the issue. The tougher — and the stupider — he sounds, the more his base seems to like him.

So where does this leave us? With this guy still the GOP front-runner, which means that unless a miracle can be pulled off at the convention, the allegedly pro-life party will be represented by someone who holds actual pro-lifers in contempt, while the left will characterize him the way this NYT headline yesterday did: “Donald Trump, Abortion Foe, Eyes ‘Punishment’ for Women…” Even though Trump is as much of a “abortion foe” as the aforementioned flat rock.

Presidential campaign generally produce much heat, and little light, on the abortion issue. But things seldom go this dark…