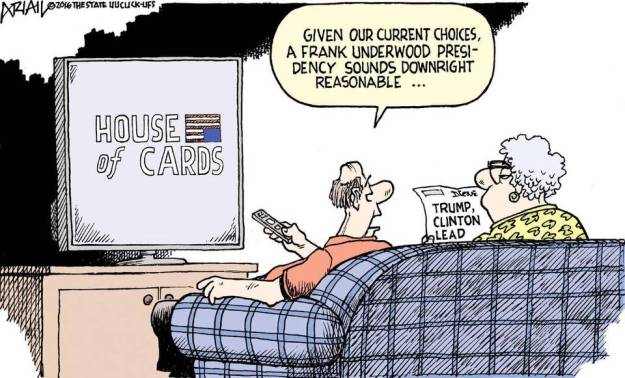 Robert Ariail has proposed it in a cartoon, as a joke.

But as an alternative to, say, Donald Trump, would you accept the devious scoundrel Frank Underwood as president?

Robert also posed the question with regard to Hillary Clinton, and go ahead and address that if you choose.

But I’m more interested with the conundrum on the GOP side, where the dynamic is entirely different. Whatever you think of her, Hillary is pretty middle-of-the-road among Democrats — members of that party won’t have an identity crisis if she is their nominee. “Anybody but Hillary” isn’t really a thing on that side.

It’s over on the Republican side that we see serious people considering deals with the devil.

We’ve already seen Lindsey Graham, who like everyone else in the Senate utterly despises Ted Cruz, say that it might be necessary to embrace the Texan in a last-ditch effort to stop the disaster of Trump. Even though he has described Cruz, accurately, as “toxic.”

So why not Underwood? Think about it: Does he advocate any horrible policies? Not so I can recall (although y’all might remind me of some dealbreakers.) Basically, he’s a thoroughly rotten, ruthless individual when it comes to seizing and keeping power. But as long as the policies were relatively benign, would that not make him preferable to someone who is both personally and in policy terms unthinkable?

Saying that runs against my own inclinations. Over the years I’ve increasingly come to care less about people’s specific policy proposals and more about their character. That’s because no one can predict what will really arise once the person’s in office — the candidate’s promises may become impractical, or ill-advised, based on unforeseen circumstances. I look for someone who I trust to make good decisions in the face of the unanticipated.

And it occurs to me that maybe, maybe we could expect ol’ F.U. — who is a pretty smart guy, aside from all his character defects — to act wisely and responsibly, if only because he does love power so much, and therefore would not want to screw up and lose political support.

Whereas we know that Donald Trump doesn’t know wise policy from a hole in the ground. Even if he were trying to do the right thing just to look good, he wouldn’t know how.

13 thoughts on “Which would you prefer as president: Trump or Underwood?”