By that I mean, when Americans were Americans first, as opposed to seeing themselves as Democrats or Republicans or liberals or conservatives or Tea Partiers or what have you.

This fit of nostalgia was prompted by reading a book review in The Wall Street Journal today, of a book titled Harry & Arthur: Truman, Vandenberg and the Partnership That Created the Free World. After noting that upon the death of FDR, many (including the new president himself) doubted that Harry Truman was up to the job, the review continues:

Watching from the Senate, Republican Arthur Vandenberg wrote to the new president with words of encouragement. “Good luck and God bless you,” he said. “Let me help you whenever I can. America marches on.” In his diary, he was more pensive: “The gravest question-mark in every American heart is about Truman. Can he swing the job?” To which the optimistic answer came, “Despite his limited capacities, I believe he can.” 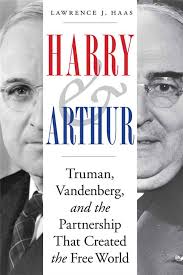 Those words seem extraordinary today. The Republicans had not won a national election since 1928. Roosevelt had ridden roughshod over them in Congress with his New Deal, broke the tradition of serving only two terms and fashioned a liberal Supreme Court. After 12 years of humiliation and defeat, FDR’s death could have provided Republicans with an opportunity to get on the front foot, to take advantage of an inexperienced and uncharismatic new president. And yet here was Vandenberg, one of the leading Republicans in the Senate, saying not only that he believed the man could overcome his limitations but also that he would do everything he could to help him.

Lawrence J. Haas’s “Harry & Arthur” is thus a story of bipartisanship at work. The subtitle, “Truman, Vandenberg and the Partnership That Created the Free World,” seems at first sight hyperbolic, at least concerning Vandenberg, but Mr. Haas makes an excellent case that Truman’s worldview could not have been implemented without the senator from Michigan. The two men shared a vision for America in the world and over the next six years, until the senator’s death from lung cancer in 1951, set about putting it place. Even a short list demonstrates the revolution in global strategy that would take place during the Truman years: the Marshall Plan, the Truman Doctrine, NATO, the U.N. Charter, not to mention the creation of the CIA, the Defense Department and the U.S. Air Force.

Those were indeed the days, when such alliances were possible…

48 thoughts on “Halcyon days, when Americans were Americans”