The Wall Street Journal today published an excerpt from a interesting-sounding book called The Gunning of America: Business and the Making of American Gun Culture, by Pamela Haag.

After asserting that in the early part of our history, guns were not so much romanticized as seen as tools that a lot of people needed, the account gets to the point when marketing came into play: 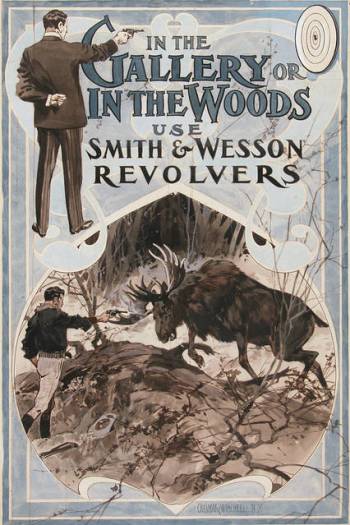 Though some Americans always loved their Winchesters and Colts, many others saw guns as dowdy, practical tools. They would shop for them by perusing advertisements in farm-focused periodicals like the American Agriculturalist or the Rural New Yorker.

As the frontier was settled and U.S. cities grew, fewer Americans even needed guns as tools. By the turn of the 20th century, the industry had embraced the emerging science of marketing. Gun companies began thinking about how to create new demand for their products. In this respect, their business was no different from the stove or soap business.

Having started with customers who needed guns but didn’t especially love them, the industry now focused on those who loved guns but didn’t especially need them. In the late 1800s, gun companies were innovators in advertising, among the first merchandisers to make extensive use of chromolithography, an early technique for producing multicolored print. Their calendars and other promotional materials were works of art, depicting exciting scenes in which gunmen faced off with bandits or beasts….

I like that bit about how “the industry now focused on those who loved guns but didn’t especially need them,” which helped encourage many people’s emotional attachment to these items.

Gun-industry advertisements began to invoke the “natural instinct” to own a gun or a “real boy’s” yearning for one. A 1920 ad in Literary Digest neatly summarized this spirit: “You know [your son] wants a gun. But you don’t know how much he wants it. He can’t tell you. It’s beyond words.” Gun marketing had moved from describing how guns work to describing how guns make their owners feel.

This period, before the outbreak of World War I, saw the birth of today’s American gun culture. Within a few decades, as guns became more prominent in criminal activity and suicides, an antigun culture also began to rise. Many Americans recoiled from these new forms of everyday violence, even as others increasingly cherished their firearms and the personal meaning they found in them. The U.S. was on a slow spiral toward the modern, polarized politics of guns.

And here we are, a nation split between people who are appalled by the existence of guns and others who would rather die than relinquish them.

26 thoughts on “Insight into our modern polarization over guns”