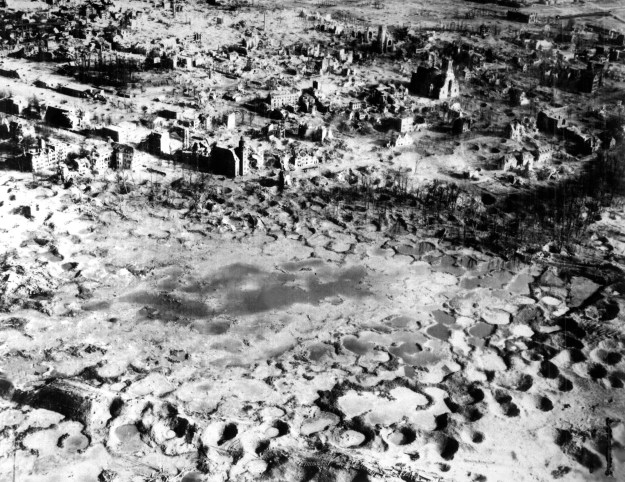 Wesel was 97% destroyed before it was finally taken by Allied troops in 1945. See that carpet of craters? Wikipedia doesn’t SAY those are bomb craters, but what else might they be?

I tend to agree pretty frequently with Charles Krauthammer on national security issues, but I was disappointed in him over the weekend.

Did you see his column assessing the foreign policy approaches of Bernie Sanders, Hillary Clinton, Ted Cruz and Donald Trump, which he termed, respectively, “passivist,” “internationalist,” “unilateralist” and “mercantilist.”

There was much of value in the column, and some things to enjoy — such as his observation that Trump’s worldview comes closest to that of King Philip II of Spain (1556-1598).

Of course, I was disappointed that he left out Kasich — I reject the notion that we have no options left but these four. But to his credit, he promised that “If Kasich pulls off a miracle, he’ll get his own column.” Which he would, of course, unquestionably deserve at that point.

Most of his observations are sound, and he is scrupulously careful to acknowledge that Hillary Clinton would likely be less reluctant to take effective action in the world than her erstwhile boss, President Obama. He says her nearest historical analog is her husband’s approach in the 1990s — which isn’t as good as, say, Tony Blair in that decade, but it wouldn’t be the worst thing in the world.

What gets me is the way he bends over backwards to make Cruz’ approach palatable:

The most aggressive of the three contenders thus far. Wants post-Cold War U.S. leadership restored. Is prepared to take risks and act alone when necessary. Pledges to tear up the Iran deal, cement the U.S.-Israel alliance and carpet bomb the Islamic State.

Overdoes it with “carpet” — it implies Dresden — although it was likely just an attempt at rhetorical emphasis….

Really?!?!?!? “Overdoes it?” The fact that Cruz uses that word utterly disqualifies him from consideration as POTUS. Whether he really wants to do that, or merely does not understand what the word means, he is beyond the pale.

Carpet bombing, also known as saturation bombing, is a large aerial bombing done in a progressive manner to inflict damage in every part of a selected area of land.[1][2][3][4] The phrase evokes the image of explosions completely covering an area, in the same way that a carpet covers a floor. Carpet bombing is usually achieved by dropping many unguided bombs.

And yes, when we think of “carpet bombing” we do think of Dresden, and Tokyo, and Cologne, and all those other places that we sent thousands of planes over in an effort to destroy everything below — including all those civilians.

I’m not going to get into the ethics of our having done that in the course of total war, in a time in which we lacked the technical precision of modern munitions. I’m just going to say that that is what is clearly, unquestionably meant when one says “carpet bombing” — that you’re dropping a carpet of bombs to destroy everything and everyone in the covered area, and let God sort them out.

There is no room in the 21st century, when we have so many other options, for a suggestion like that. The term is primitive, atavistic, barbaric — which is no doubt why Cruz said it, in an attempt to appeal to Trumpist sensibilities.

Yet Krauthammer is completely blasé about it, with that forgiving “overdoes.”

But that’s just the setup to the really bad thing: His assertion that Cruz’ closest historical analog is… Ronald Reagan.

So it’s come to this: That folks on the right are working so hard to talk themselves into settling for Cruz that Charles Krauthammer can equate the Cruz worldview with that of the one guy Republicans believe could do no wrong.