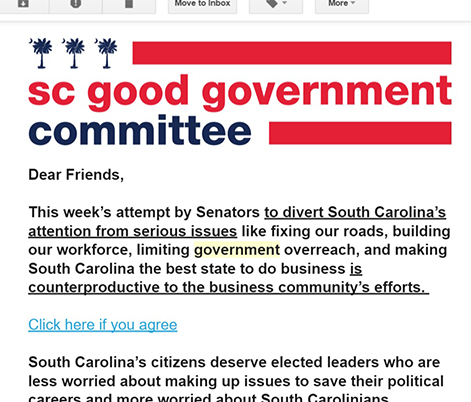 This is a small matter, but I felt that someone should point out what should be obvious…

I got this email from a group calling itself SC Good Government Committee… No, excuse me, “sc good government committee,” e.e. cummings-style.

So I immediately thought, as any journalist would, “Who’s the sc good government committee?” Scanning through the email release partially satisfied my curiosity, at least by implication: It is apparently connected somehow to the state Chamber of Commerce. Ted Pitts — my former representative, Nikki Haley’s former chief of staff, and now president of the state Chamber — has a statement that is featured prominently in the release:

“South Carolina businesses don’t need the government telling them how to run their business. The governor has called the bill unnecessary and the State Chamber strongly agrees. South Carolina businesses already understand the importance of treating people with respect. Senator Bright is trying to create a political crisis that doesn’t exist to save his political career. Meanwhile our state has real issues we need to address including crumbling roads and a skills gap. We’ll be working on electing serious Senators next year who will be focused on addressing the states infrastructure and workforce needs and limiting government’s role in our lives.”

But when I clicked on the logo in the email and went to the group’s website in search of further info, I was stymied. The first and most obvious question — Who are the members of this committee? — is never answered. The About page says:

The South Carolina Good Government Committee (PAC) promotes good government in the Palmetto State by supporting free market policies in an effort to create economic opportunity and improve the quality of life for all South Carolinians.

The Good Government Committee is authorized to financially support selected elective measures and candidates. This PAC is organized and operated on a voluntary, non-partisan basis.

To further the democratic process of the free enterprise system
To advance business, industry and private sector job creation in South Carolina

The Good Government Committee achieves its goals by:

Beyond that, the site’s blog and Latest News pages let us know that this PAC is interested in electing certain people to the Legislature. The blog promises, “The Good Government Committee will endorse candidates in the coming weeks.” So far, the group has taken an interest in the special Senate District 4 election that elected Rep. Mike Gambrell (that is, he won the GOP runoff and is unopposed in the general). The group’s Facebook page congratulated him for winning his runoff.

And that’s all I know.

I’m not alleging ill will here or anything because this kind of “mystery committee” thing is all too common to read much into it. But I will say this:

If your goal is good government, then you will certainly be advocating for greater transparency in government.

The least you could do is set a good example by telling us, clearly and frankly, who you are…