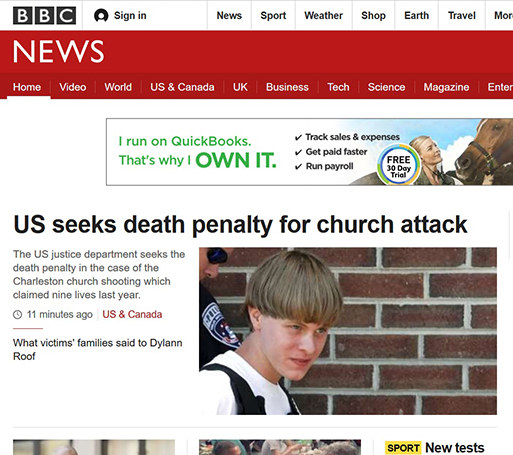 As you see above, some South Carolina news is leading the BBC.

Roof, 21, of Columbia, is white. All his victims were African American.

“Roof targeted men and women participating in a Bible-study group at the Emanuel AME Church in order to magnify the societal impact of the offenses,” the notice said.

David Bruck, one of Roof’s lawyers, said Tuesday the defense team would have no comment on the government decision….

Personally, I’m always against the death penalty. Of course, if you’re going to have one, this would seem to be the sort of case it would be designed for.

That said, and once again if you are going to have capital punishment, it seems more legitimately the province of state government, and not the feds. And certainly not for Thoughtcrime, which seems to be the federal interest in this. This is the one thing that can bring out libertarian impulses in me, especially if you’re talking about executing people for having the wrong ideas, however abhorrent.

Roof stands accused of committing a horrific, unspeakable crime upon good people who were our neighbors here in South Carolina. I think our laws, and our courts, are perfectly capable of dealing with him.

12 thoughts on “Feds to seek death penalty for Roof”