All of y’all probably saw this already, but I would have missed it if Kathryn Fenner had not brought it to my attention via Facebook over the weekend.

Of course, Facebook being Facebook, I had to go hunting elsewhere to find an embed code. (I couldn’t even find it at the White House, which is where Kathryn had gotten it — apparently, they only posted it on FB — unless I’m just looking in all the wrong places on the website.)

It was great to see her back in the saddle. And seeing her as press secretary instead of chief of staff takes us to those wonderful days when Leo was still alive. Sigh…

I was a bit disappointed in her when she ducked the one question she got from the actual reporters assembled: “Who is President Bartlet supporting in the Democratic primary?”

But she ducked it with typical C.J. aplomb… 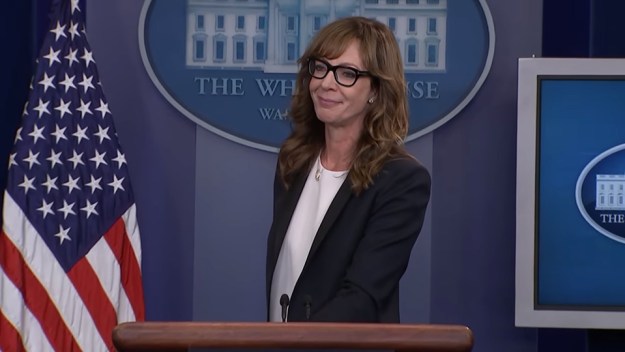 Allison Janney fields an actual question from an actual reporter in the actual West Wing.

7 thoughts on “ICYMI: C.J. Cregg returns to the briefing room”