Democrats, and probably even some Republicans, demonize Karl Rove. Some probably have a litany of specific sins they can recite, but in general he seems to be for them a dark, menacing presence pulling strings in the background, like “the Koch brothers,” or Sauron behind Saruman.

But whatever he has done or not done to deserve that reputation, he has assuredly done a monstrous thing today. 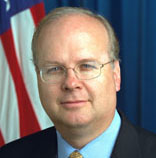 He has offered, without apology or irony, advice to Donald Trump on how to win the general election. As though he were just another Republican candidate, another client (which is perhaps what Rove hopes he will be), and this is just another election.

In the same 24 hours in which his former bosses, Bushes 41 and 43, have said they do not plan to support Trump, and in which one of those very Koch brothers has hinted he might vote for Hillary Clinton, Rove has offered Trump calm, sensible, bloodless pointers on how to succeed. As though his success were a desirable thing.

His Wall Street Journal piece is headlined “What Donald Trump Needs Now,” and the subhed tells you that Rove isn’t being facetious: “To stand a chance, he must tone it down, hire a fact-checker and open his wallet.” To which I respond, to hell with what Trump “needs;” what the nation needs is for him to lose, and lose big.

The closest Rove comes to criticizing Trump comes at the beginning, when he says Trump’s “success was achieved only by inflicting tremendous damage to the party,” and that his suggestion that Cruz’ father was connected to the JFK assassination was “nuts.” But rather than treat these as evidence of something fundamentally wrong with Trump, Rove looks upon them as rough edges to be smoothed. Trump has damaged the party? Well, you can’t make an omelette without breaking eggs. As for saying something “nuts,” Rove is like, Ya knucklehead! We need to break you of that silly habit so you can win this thing!

As though he were coaching an otherwise gifted boxer to remember not to drop his guard.

The everyday ordinariness, the sheer banality, of the advice Rove offers is appalling. An excerpt:

For the general election, the Trump campaign is behind in everything: digital operations, the ground game, advertising, you name it. The campaign must add new people and talents but would be wise to leave the ground game to the Republican National Committee. Sign the “joint fundraising agreements” that RNC Chairman Reince Priebus and the GOP Senate and House campaign committees must have to collect the resources necessary for a massive voter turnout effort that is beyond the Trump campaign’s abilities.

Mr. Trump should also avoid attacking Mrs. Clinton in ways that hurt him and strengthen her. He is already in terrible trouble with women: In the April 14 NBC/Wall Street Journal poll, 69% of women rate him negatively, 58% very negatively. So stop saying things like: “Frankly, if Hillary Clinton were a man, I don’t think she’d get 5% of the vote.” He was lucky her response to that jibe was so lame. Next time it won’t be.

Mr. Trump must also retool his stump speech. Voters will tire of The Donald if he doesn’t have a second rhetorical act with far fewer insults and more substance. Reading more speeches from a teleprompter, particularly on the economy, will help. The Trumpistas argue that voters don’t need details, but those up for grabs in November do. These speeches will put meat on the bones of his policy views and yield new material for the stump….

As though… as though the idea of Trump becoming president was just an interesting challenge, a puzzle to be solved, and not an unthinkable nightmare for the country.

This same day, E.J. Dionne has a piece in The Washington Post in which he appeals to Republicans, the media, and the rest of us to avoid this very thing. “Please don’t mainstream Trump,” he pleads, and he’s absolutely right. Don’t act like this is just another election, and Trump just another nominee.

My friend, the writer Leon Wieseltier, suggested a slogan that embodies the appropriate response to Trump’s ascent: “Preserve the Shock.”

“The only proper response to his success is shame, anger and resistance,” Wieseltier said. “We must not accustom ourselves to this. . . . Trump is not a ‘new normal.’ No amount of economic injustice, no grievance, justifies the resort to his ugliness.”

Staying shocked for six months is hard. It is also absolutely necessary.

26 thoughts on “Karl, all Trump ‘needs’ is to LOSE, for the sake of the nation”