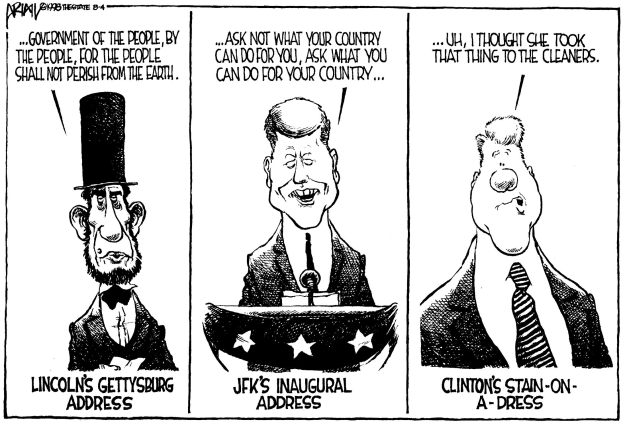 It’s been interesting to watch the writers at The Wall Street Journal begin their shift from fighting the Trump juggernaut with all their might (standing alongside me in pushing for Kasich), to getting back into their comfort zone by going after Hillary.

This column today, reminding us of all the Clinton scandals, is a case in point.

As if people who know better have an alternative to Hillary, not matter how many unpleasant memories she represents.

I’m not joining that trend, but it reminds me of something, so I thought I’d share this, one of Robert Ariail’s best ever. Bill Clinton was a huge inspiration to Robert, which is one reason why he was a Pulitzer finalist twice during that era.

This one, from 1998 I believe, exhibits one of Robert’s signature strengths — his inspired use of language as well as his drawing ability.

I was looking for this cartoon yesterday to stick into a comment, but since Robert went to the trouble to dig it up for me, I thought I’d give it better play than that.

2 thoughts on “One of Robert’s best cartoons EVER”