Meant to post something on this this morning, but didn’t get to it, and Doug just posted something that reminded me…

Sen. Lindsey Graham paused for five full seconds and stumbled over his words pondering the question: When is the last time he split with fellow Republican Sen. John McCain on a major issue? 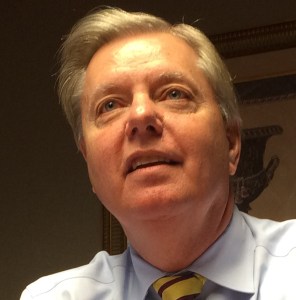 “I don’t know, let me think about it,” Graham (S.C.) finally said of his closest Senate friend. “There have been several. I just can’t recall right now, right off the top of my head.”

Yet that’s what has happened in the wake of Donald Trump’s ascendancy to presumptive Republican nominee for president. In the Republican civil war over Trump, this is perhaps the most glaring example of two “brothers” fighting on opposite sides of the battlefield. It reflects a larger chasm in the Republican Party over whether to embrace the anti-establishment businessman that could end up costing the party the presidency in November…

Yeah, he probably overdid the “brother against brother” Civil War shtick, but try to look past that to the substance…

I remain proud of Lindsey on this, but I’m disappointed with McCain.

The temptation of course is to say McCain is being a political opportunist to save his electoral bacon, like when he denied his own maverickness in 2010.

But that doesn’t add up. As the story says:

While the Arizona Republican is heavily favored to win his primary, his state’s GOP voters gave Trump nearly 50 percent in a blowout for the real estate mogul in the state’s March presidential contest.

Then, McCain faces a general election challenge that could be the “race of my life,” as he described it at a fundraiser that was taped by an attendeeand leaked to Politico. Despite the low profile of the likely Democratic candidate, Rep. Ann Kirkpatrick, McCain suggested that Trump’s divisive rhetoric and policies toward immigrants would make his race difficult because of his southwestern state’s heavy Latino bent….

OK, so… he’s poised to win his primary, which is the only place where backing Trump could help him. But he doesn’t need that help. On the other hand, he’s got a huge general election challenge in which backing Trump definitely HURTS him.

So this makes no sense as opportunism.

Guess I’ll just have to take the Arizonan at his word — that he’s backing the (presumptive) Republican nominee because he’s a Republican and that’s what he does.

That’s wrong-headed, and illustrates one of the worst aspects of partisanship, and this would be an EXCELLENT time for McCain to duck into a phone booth and change into his Maverick costume — but within the universe of partisans makes sense. Party member do that sort of thing. Wish they wouldn’t, and am glad when they don’t…

3 thoughts on “The split between Los Dos amigos, Graham and McCain”