We’ve known this, and the story The Washington Post ran over the weekend just reiterated what we knew.

But it’s the one thing that sums up the way our presidential election process has failed us more clearly than any other, so it bears repeating: Never in our history, to the extent it has been measured, have the two parties nominated two people as unpopular as Hillary Clinton and Donald Trump.

It makes you wonder what Budweiser thinks they are celebrating by calling their beer “America” through the election season. What do they think this is, 2008?

As the story says,

The coming presidential race between Hillary Clinton and Donald Trump begins in a virtual dead heat, a competition between two candidates viewed unfavorably by a majority of the current electorate and with voters motivated as much by whom they don’t like as by whom they do, according to a new Washington Post-ABC News poll.

Never in the history of the Post-ABC poll have the two major party nominees been viewed as harshly as Clinton and Trump.

If this is what this two-party system produces, we really need to have a long talk about reforming the system, don’t you think? 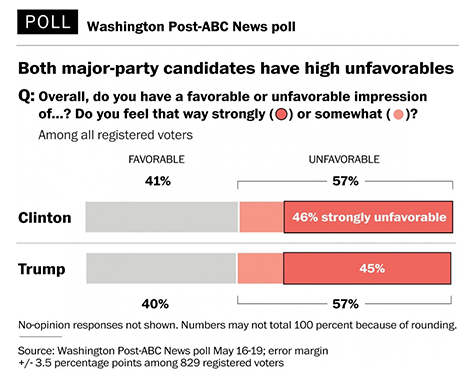 I hope the Post doesn’t mind my sharing this image of their graphic. If they do, I’ll take it down. In the meantime, I urge you to click on the image and go their site, read their stories, subscribe, and patronize their advertisers…