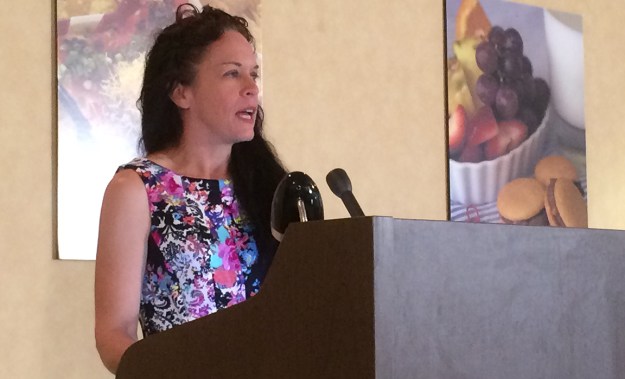 Sorry about the quality of the photo. The light wasn’t ideal…

Yesterday, as I mentioned, was my day for awards ceremonies. The best, for me, was the one at The State at which Associate Editor Cindi Scoppe received the paper’s Gonzales Award (named for the paper’s first editor, who was shot and killed on Main Street by the lieutenant governor in 1903).

It was the second time she had received the award, having gotten it in 1999 as well.

Bud Ferillo, Bob McAlister and I had written letters supporting her nomination, which is why we were there.

The work for which Cindi was honored took place during her first months alone, as the last remaining member of the editorial department. (There were once nine of us.) I addressed the significance of that in my letter supporting her:

When it comes to cold, dispassionate, hard-eyed assessment of South Carolina government and politics, no one touches Cindi Scoppe. Not in 2014, and not in 2015, either.

But in 2015, she did something else as well. She grew. She still did everything she had always done, the stuff no one else could do, but she added a couple of new ingredients: Heart and Soul.

There was a time when she didn’t have to do that sort of writing, and that comforted her. She liked being, in her own assessment, the board’s “Designated Mean Bitch.” When empathy and violins were called for, she was more than happy to let other associate editors “resonate” with the proper emotion for the moment – and some of them were really good at it. She would stick to the hard stuff.

But by mid-2015, there were no other associate editors. Warren Bolton – an ordained minister who could speak to the heart as well as anyone who had ever served on the board – left in the spring, and by June, Cindi was alone….

That sort of sets up what Cindi had to say in her acceptance speech. Here it is, shorn of some personal acknowledgments at the beginning:

The day after Dylann Roof slaughtered those nine innocents, Bertram Rantin stopped by my office to chat. I probably said I knew I needed to write something about the massacre but I had no idea what to say. Because what our community needed, what our state needed was not policy prescriptions but emotion and understanding. What was needed was RESONATING. And I don’t do resonating.

And Bertram said, you know, we used to have two people who could speak to this sort of situation. And isn’t it ironic that this would happen just weeks after we lost both Warren Bolton and Carolyn Click.

We talked some more about other things, and he left, but his words stayed in my head. And at some point, I realized that I had to step up to the task. I realized, as Brad wrote in his letter supporting my nomination, that I had to grow. I had to become a writer I had not been willing to.

Three thousand years ago, when God wondered aloud who he could send to speak to his people, the prophet Isaiah answered saying “Here am I, send me.” I think that’s one of the coolest passages in the Bible. Christians and Jews see that as a great act of faith. But it could also be seen as an act of dedication, of commitment to a cause, to a calling.

And don’t we all have a calling? Isn’t that what journalism is?

Shouldn’t we all be willing to ask, in the secularized iteration of Isaiah’s response: “If not me, who? If not now, when?”

Isn’t that the commitment that all of us need to give to our craft, to our community?

Now, except for Paul, there’s no one on the second floor who should be doing what I do routinely – advocating for policy positions. It’s probably not often that you should be writing about your personal experiences. Certainly not about how your faith informs your life decisions, or how it relates to public policy.

But what I had to do last year – after the massacre and a few months later, after the flood – is something every one of us can and should be willing to do every day: Look for where we can make a difference, fill roles we might not be comfortable filling, grow, if necessary, into the bigger demands of our jobs.

In his supporting letter, Bob McAlister said this about our jobs:

“I have spent my professional life in South Carolina’s political/media axis and have seen the media, especially newspapers, evolve. Of this I am certain: Our citizens have never needed good journalism more to help them wade through the complexities of life and the chaos of the Internet.”

As newspaper staffs grow smaller and the cacophony of self-interested voices grows louder and objective truth becomes increasingly optional, what each one of us does becomes exponentially more critical.

I would urge all of us to focus on the critical nature of what we would do: Not duplicating what others are doing, but providing our readers with important information they can’t get anywhere else. I urge you all to be truth-tellers, not just stenographers.

I can remember a time when it simply didn’t occur to journalists that we needed to verify basic facts from someone in a position of authority. Oh, we needed to watch for spin. We needed to make sure they weren’t manipulating numbers or not quite telling the whole story. But if a governor said half the job applicants at the Savannah River Site failed drug tests, it was safe to assume that was true. Not anymore.

But at the very least, we can do this: When people say things we know are not accurate, and we report what they say, we can point out the facts. We can say this is what the law actually says. This is what was actually spent. Or this is what the audit actually recommended.

This isn’t being an editorial writer. This is being an authoritative voice. This is being a journalist. This is something I did as a reporter. It’s something y’all do sometimes as reporters. It’s something we all need to do more of. We need to help our readers understand what is true and what is not. We need to give our readers the facts and the context they need to make informed decisions. It doesn’t matter whether we agree with those choices or not; it matters that they are informed.

Of course, as Jeff will remind us, we need to write things that people will read. And this is the hardest part. It’s never been easy to get people to read the stuff they need to know, and now we have metrics that show, at least in the online world, how little they read it. So it’s very tempting to just give up and give people what they want. That’s the easy way to drive up our unique visitor numbers.

It is not the right way.

The right way is keep trying to figure out how to turn what people need into what they want.

It is a daily battle. It is a battle that I often lose.

But it is a battle that I absolutely must keep fighting.

It’s a battle that you absolutely must keep fighting.

We have big and difficult jobs, and they are getting bigger and more difficult every day. And we have to stretch and grow to fill those jobs.

We have a calling. We work for our community.

It is not an overstatement to say that our system of self-governance depends on our willingness to fulfill our calling.