My old colleague and friend Jeff Miller brought this to my attention, as he had not seen anyone draw a direct connection between Donald Trump and Ben Tillman, although he was “Surprised it took this long.”

As the civil-rights movement burgeoned, Wallace repositioned himself to lead the white resistance and famously declared, “Segregation now, segregation tomorrow, segregation forever.” Wallace, a political innovator of the first rank, pioneered the sublimation of racial rage into hatred of government, not just the federal imposition of black rights in a second Reconstruction, but government meddling generally. This anticipated the politics of Newt Gingrich, Paul Ryan, Ted Cruz, and the Tea Party because it connected Southern racial resentment to the anti-government libertarian economics of the business right. The explicit racism became latent and coded—a dog whistle. The stars of today’s Republican right are all practitioners of this art. But Trump went them one better.

“Trump doesn’t tweet dog whistles, he blasts foghorns,” wrote Washington Post op-ed columnist Eugene Robinson. In this, Trump echoes an earlier band of 20th-century Southern demagogues. Southern politicians such as Mississippi’s Theodore Bilbo, South Carolina’s “Pitchfork Ben” Tillman, and Georgia’s Eugene Talmadge were more blatant and direct than Wallace in demeaning blacks. And like Trump, they relished the fact that they were not about issues—for issues (other than race) mattered little in traditional Southern politics. Instead, they concentrated on providing a venomous, racist form of entertainment for the white working class—another parallel with Trump.

I have to disagree with the premise, though. I don’t think Trump is more overt than Wallace, or that he “blast foghorns” rather than “dog whistles.” 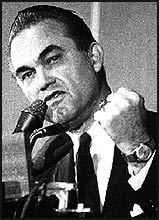 The truth is that Trump is not articulate enough to blast any message clearly. He is well within the tradition of implying rather than directly stating, at least most of the time.

But that suggests to me one way in which Wallace was superior to Trump: He was far more articulate.

I watched a documentary recently about the annus horribilis 1968, and was struck by one thing: All of the candidates, including Wallace, had such a clear grasp of issues and expressed their views clearly as well.

Wallace was a hateful creep, but he was a hateful creep who could speak in complete sentences. He towers so far over Trump in that regard that it’s startling to go view those old clips, and compare them to the unintelligible mush that comes from Trump’s mouth.

Yeah, I know — you don’t think “erudition” when you hear “George Wallace.” But compared to Trump, he was the Algonquin Round Table…

One thought on “Drawing a connection between Trump and Tillman”