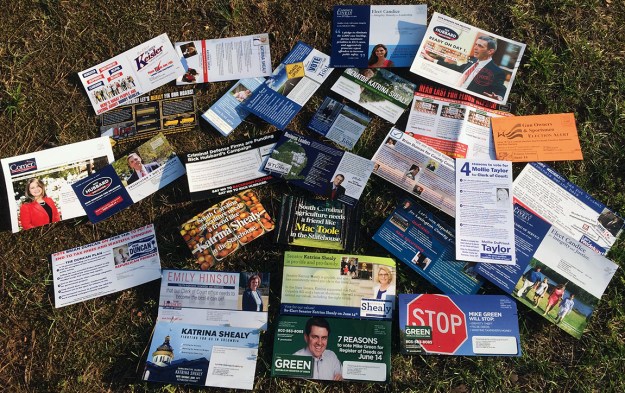 My colleague Lora Prill at ADCO brought me some of the primary-related mail she’s received at home. This is about a third of it, she says.

As you know, I’ve been pretty dismissive over the years of the respective positions of both Democrats and Republicans regarding voter ID. (Basically, I think Republicans came up with it to address a virtually nonexistent problem, and Democrats exaggerate the degree to which it amounts to an insurmountable obstacle.)

So my Democratic friends should really enjoy the irony of this:

Today, I was denied the right to vote for lack of a photo ID!

But I’m not going to picket the State House or anything, on account of it being, you know, my fault…

Basically, I showed up without my wallet, something I realized when I walked into the polling place, approached the check-in table, and reached into my jacket for it. I announced my problem, was told, “You’d better go home and get it.”

Which I did. But I did it on the way downtown, and didn’t go to the polling place again, as I no longer had time. (Get this: I searched all over, and finally found it in a pocket of a pair of pants I was wearing on Sunday. Which means I drove around all day yesterday without a wallet. Sheesh.)

But I’ll go back this evening. Which makes me a little nervous. I usually vote first thing, so that I don’t have to worry about something coming up to prevent me from making it by 7 p.m.

Also, I don’t get to walk around all day with one of those “I voted” sticker, which, square that I am, always makes me feel a little bit proud of myself.

So, that’s me. How about you? Did you vote yet? How was it? Were there lines? Were there technical glitches? Share…

20 thoughts on “I was denied the right to vote for lack of a photo ID!”