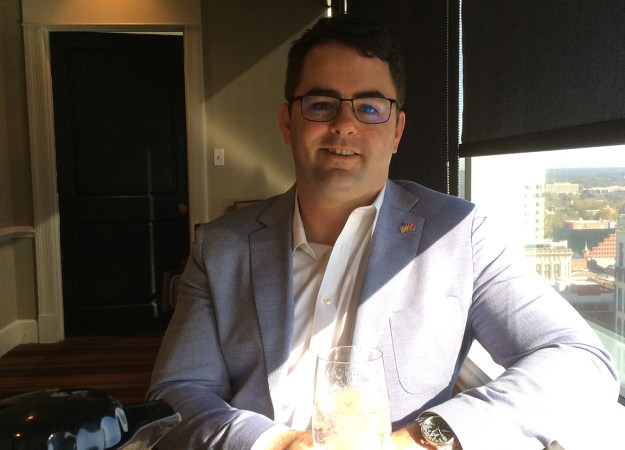 The Caskeys and the Warthens have some common history, although it’s from before my time. Remember when I mentioned that my mother was writing her childhood memories, and I was typing them and creating a blog for them? Well she made prominent mention of “Hop” Caskey, who was a teacher and coach at Bennettsville High School in the ’40s, and his wife, “Madam.” They were good friends of my mother’s family — they used to buy season tickets together for Tarheel football so they could go see Charlie “Choo-Choo” Justice play. 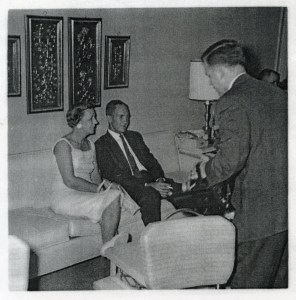 Well, those were Micah Caskey’s great-grandparents. I was happy to be able to share with him recently a picture of them that he’d never seen before. By the way, the photographer in the foreground is Jimmy Covington, who’s been a fixture in Columbia media circles for decades. He was at BHS with my Mom.

Still, I’d never met him until back in March, when he filed to run for Kenny Bingham’s House seat. We had a wide-ranging conversation about values and policies. Unfortunately, if I took notes I can’t find them. At the time, my main aim was to find out whether this was a someone I wanted to run against, so I don’t think I took notes at all. I was looking for an overall impression.

And the overall impression was this: I was reluctant to run against him because dang it, not only is he a Marine combat veteran, but it was eerie how many things we agreed on. Of all the things we talked about, there was one thing we sharply differed on, and now I’ve forgotten what it was.

So for blogging purposes, that was a useless interview (aside from getting the photo above). But fortunately you can find out about him at his website. He lives in Springdale, and he’s an assistant solicitor in the 11th Circuit solicitor’s office (the one Rick Hubbard and Candice Lively are competing to run). I asked him why he didn’t just run for solicitor, and he said others seeking the office had more experience than he did.

The son of a locksmith, he’s the product of Lexington 2 schools and the University of Florida. He describes his military service thusly:

After college, Micah spent the next several years on active duty in the Marine Corps—rising to the rank of Captain. Micah commanded both company and platoon-sized units during his two combat tours of duty in Fallujah and Ramadi, Iraq. Later, in 2009, Micah left law school for a year to continue his service to the country. It was during that year that he commanded a small team of specialized Marines in Helmand Province, Afghanistan.

He obtained his law degree from USC, plus a master’s in international business from the Darla Moore School. He worked as a management consultant in the oil and gas industry for awhile before joining the solicitor’s office.

Here are the issues he’s running on (which are pretty similar to the ones his runoff opponent, Tem Miles, cites):

That’s all from his website. One thing you won’t find there (or on his opponent’s site, either) are a lot of details about how he would accomplish the above. He says he’s following political advice on that, which runs against the grain because “I want to just tell people what I think about everything.” But he realizes that unless he has an hour to get into the nuances and layers of each position with each voter, it’s easy to be misunderstood when you get into specifics. 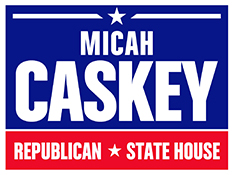 (I nodded when he said that. As you know, I am no fan of campaign promises. Tell people who you are, describe your experience and your overall interests in running. But don’t say exactly what you’re going to do, because you don’t know what you’ll be dealing with into office, and you don’t want to trapped by promises into doing something that turns out to be dumb under the circumstances.)

“Taking absolutist positions isn’t useful” because “I’ve seen how layered and complicated things can be.” To take one buzzphrase, he mentions “limited government.”

“What does that mean?” he asks. He prefers to say he likes “smart government,” but even there, you have to do a lot of explaining. For an example, he says, he’d do away with having to go to “15 different offices to start a small business.”

Bottom line,”I think I’m a common-sense candidate, a pragmatist.” He notes that someone called him a “consensus candidate,” a guy who would work with anyone from anywhere on the political spectrum who would help pass sensible legislation.

He accepts service on that.

Being about the age of my kids, he has run on the slogan of “A New Generation of Leadership.” That seems to have served him well over the much-older Bill Banning and Billy Oswald.

Now, he’s up against a contemporary and fellow attorney, Tem Miles. On June 28, GOP runoff voters will decide which young man they want representing them in this relatively new century.