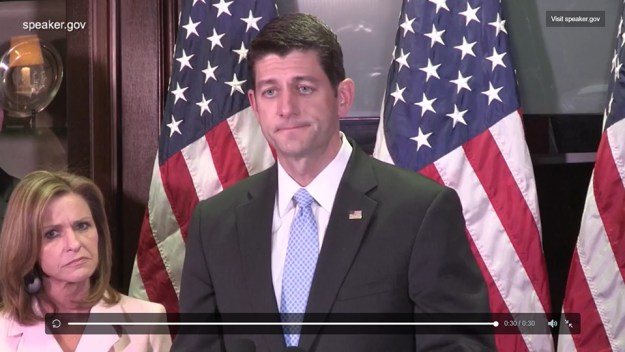 I like this screengrab from a video put out by the Speaker’s office because it looks like the lady is thinking, “Wait! What did he just say?”

Reading The Washington Post this morning, I saw that some of the nation’s top Lippmans (to borrow a term from Heinlein) were really pounding House Speaker Paul Ryan, which was fine by me because I can hardly think of anyone who more richly deserves it after his abject surrender to Donald Trump last week.

Richard Cohen’s column was headlined “Paul Ryan’s profile in cowardice,” and the body text reflected the hed. An excerpt:

What I know about Ryan is that he could not be proud of endorsing Trump. He shouldn’t be. Trump will not respect him for his acquiescence (he’ll call him a loser), and neither will anyone else. Ryan puts his legislative agenda above his own principles and the good name of the country so someday he could say, yes, Trump got us into a ruinous trade war but I trimmed a bit off the Affordable Care Act….

But that was hugs and kisses compared to the way George F. Will crushed the subject. It began like this:

The Caligulan malice with which Donald Trump administered Paul Ryan’s degradation is an object lesson in the price of abject capitulation to power. This episode should be studied as a clinical case of a particular Washington myopia — the ability of career politicians to convince themselves that they and their agendas are of supreme importance.

The pornographic politics of Trump’s presidential campaign, which was preceded by decades of ignorant bile (about Barack Obama’s birth certificate and much else), have not exhausted Trump’s eagerness to plumb new depths of destructiveness. Herewith the remarkably brief timeline of the breaking of Ryan to Trump’s saddle….

And continued in the same strong vein. While his purpose is to chop up Ryan into little pieces, he manages to eviscerate Trump on his backswing. Caligulan malice… pornographic politics…

Then he further grinds Ryan down with contempt for the magic beans he sold his integrity for, ending with a final, slashing description of Trump:

All supposedly will be redeemed by the House agenda. So, assume, fancifully, that in 2017 this agenda emerges intact from a House not yet proved able to pass 12 appropriations bills. Assume, too, that Republicans still control the Senate and can persuade enough Democrats to push the House agenda over the 60-vote threshold. Now, for some really strenuous assuming: Assume that whatever semblance of the House agenda that reaches President Trump’s desk is more important than keeping this impetuous, vicious, ignorant and anti-constitutional man from being at that desk….

But then, I had no sooner finished reading these pieces and sharing them via Twitter than this came to my attention:

So, I thought: The man has a spine after all.

I read on to see that he had also said that what Trump had said about the judge fit “the textbook definition of a racist comment.”

All right, then, I thought — the man has awakened from his zombie-like state. He is repudiating last week’s contemptible capitulation.

But no. Turns out that he still manages a complicated backflip and says he’s still supporting the racist who says indefensible things.

About what Trump said, Ryan said:

“It’s absolutely unacceptable,” he said. “But do I think Hillary Clinton is the answer? No, I do not.”

Who, pray tell, aside from aging members of the Democratic establishment and the Identity Politics warriors who think it’s highly meaningful that she is a woman, thinks Hillary Clinton is “the answer,” in the sense that Neo was “the One?”

She’s not “the answer.” But the fact is, she’s all we’ve got between us and Trump, and as Will suggested, there is no mere political consideration “more important than keeping this impetuous, vicious, ignorant and anti-constitutional man from being at that desk.”

Also, Mr. Ryan, examine your words. If Trump is, indeed, “absolutely unacceptable” — and he is — then you have no choice! You have to do all you can that is lawful and moral, even things that might be deeply distasteful to you, to stop him. Because the unacceptability is absolute! (And don’t tell me he just meant the words and not Trump. A president who goes around saying things that are “absolutely unacceptable” is himself just as unthinkable.)

Mr. Speaker, to paraphrase what the Godfather said to Sonny, I think your brain is going soft from all that comedy you’re playing with that buffoon. When Ryan threw aside the interests of the country to preserve his prerogatives in a job he didn’t want in the first place, his ability to reason abandoned him along with his honor.