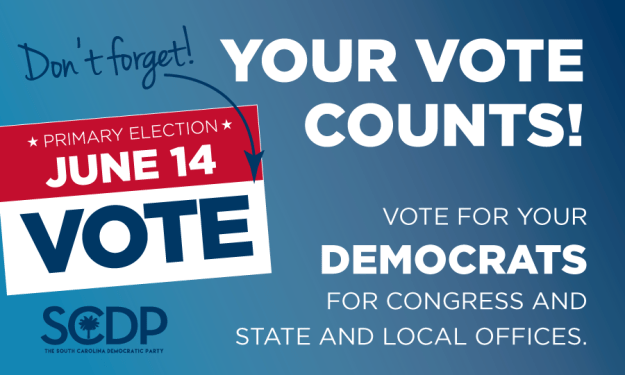 Got the above via email over the weekend.

Nice of you to think of me, SC Democrats, but I see no point in voting in your primary.

If I lived in Richland County, it would be different, as Cindi Scoppe noted in her recent column, aptly headlined “SC voters have one chance to make a difference, and it’s not in November“:

Unless you are so partisan that you can’t bring yourself to vote in a primary for the best or at least the least bad candidate in the other party, you should go where the elections are being decided. I always vote in the Republican primary when we have statewide contests, because those races are decided in the primary. This year I’m voting in the Democratic primary, because there are no statewide races and I live in Richland County, where all but one of the legislative and local contests are among Democrats. If I lived in Lexington County, I would vote in the Republican primary, for similar reasons.

Cindi and I agree politically about as much as any two people you’re likely to know, which means that she doesn’t care which party wins in November any more than I do. But she cares about having her vote count, which is why she votes in the Democratic primary where she lives, and I vote in the Republican over in Lexington County.

So that we get a voice in the actual election. Because where I live, the Republican primary is the election.

3 thoughts on “Sorry, SC Democrats! I see no point in voting in your primary — a matter of geography, you see”