The New York Times decided to have a bit of fun with the upcoming Brexit vote. Noting that a lot of Britons can be heard saying, “What has Europe ever done for us?,” the NYT’s editors harked back to the classic Monty Python bit in which a group of first-century Palestinian revolutionaries indignantly ask the same about the Romans.

Only to come up with a LONG list of examples, causing their leader, played by John Cleese, to rephrase his question:

But apart from the sanitation, the medicine, education, wine, public order, irrigation, roads, the freshwater system and public health, what have the Romans ever done for us?

But of course, whenever I see the clip, I hear the voices of all the people who insist that government is the problem, not the solution.

Unfortunately, after years of being governed by folks like that — or at least, folks who walk in fear of the Grover Norquists of the world — many of the blessings of a civilized government are falling apart. Thereby putting us in a situation in which government actually is doing less of what it should do for us, or at least doing it less well. Which convinces more people that government is no damn’ good, which causes more such people to be elected, and so forth…

Anyway, that’s sort of what my friends over at The State are on about with their new series, “How SC’s leaders have failed South Carolinians.”

And they have failed us. Because if our elected officials can’t manage to keep the basic functions of government up and running properly, what indeed have the Romans ever done for us? 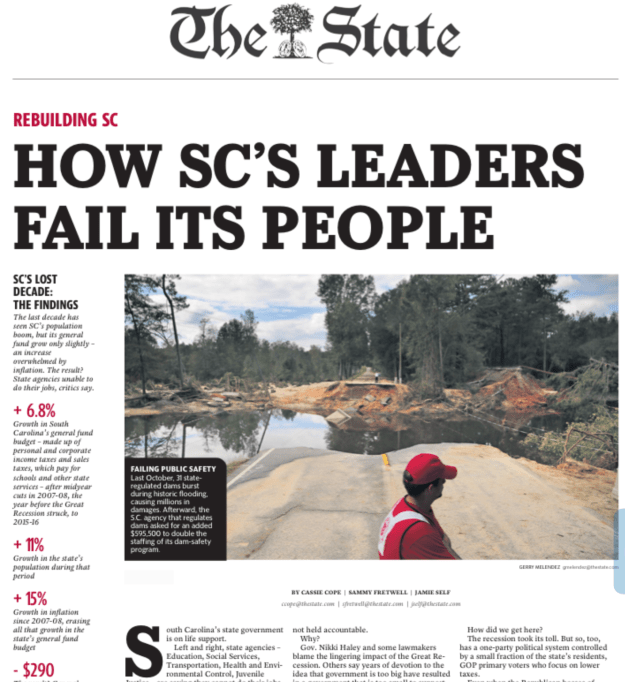 7 thoughts on “What has government ever done for us?”