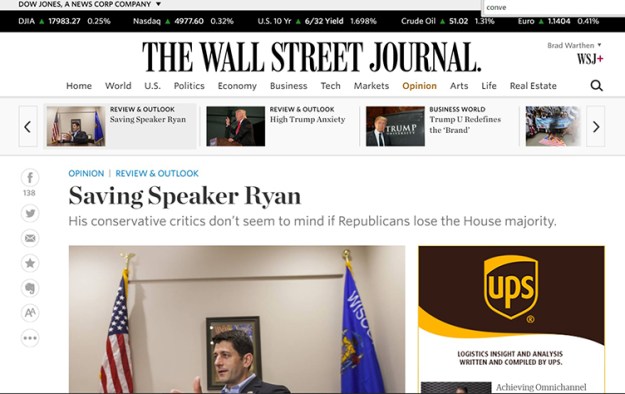 Every morning, I read three newspapers (or rather, their associated apps), just for starters. That is, I read the portions that interest me (mostly politics and opinion) in the three papers I subscribe to — The State, The Washington Post and The Wall Street Journal. Beyond that, I’ll check out individual items from other sources as they are brought to my attention by Twitter.

I know that makes me seem like the least sociable member of the Capital City Club, sitting there alone at my table with my nose in my iPad (someone remarked on it just today). But it’s the only way I can keep up. That’s my main reading time.

Anyway, yesterday I had on my mind several things I’d read in the Post. Today, the Journal made more of an impression.

For awhile there, you may recall, I was frequently praising the editorial board of the WSJ because they were trying so hard to get the GOP to wake up and back John Kasich.

Lately, since Kasich dropped out, I’ve been more and more disturbed by what I’ve read there. In keeping with the general partisan tendency toward acting like this is just another election in which it matters which party wins, I’ve actually seen the editors start offering Trump advice, saying such things as If he wants to improve his chances in November, he needs to do thus-and-so…

As though improving his chances were desirable. Which makes me want to retch, particularly because I know they know better.

There was even some of that today…

The polls show the economy is Mr. Trump’s chief advantage over Hillary Clinton, but he was too busy claiming Hispanics can’t be fair judges to showcase Friday’s dispiriting jobs report. He also allowed the State Department investigation of Mrs. Clinton’s private email practices to tumble down the memory hole, and he made little effort to counterpunch her speech on his temperament and foreign policy—aside from tweets about her appearance. Unanswered attacks usually succeed….

But what stood out to me, in that editorial and in a couple of other places, was the repeated mention of the possibility, however slim, of still stopping Trump at the convention. I was at first startled by it, then increasingly intrigued by the way they kept mentioning it.

What brought this on was the widespread consternation among Republicans about Trump’s unprovoked comments about Judge Gonzalo Curiel. Personally, I’m still trying to figure out why this abomination is so much more shocking than all his previous ones. Maybe the GOP really had hypnotized itself into thinking there was a “new Trump,” as unlikely as that seems. Whatever.

From the above-referenced editorial, headlined “High Trump Anxiety,” ended with these words:

If Mr. Trump doesn’t start to act like a political leader, and his poll numbers collapse between now and the July convention, he may start to hear rumblings that delegates are looking for someone else to nominate. As traumatic as that would be, the Republican desire to avoid a landslide defeat that costs the House and Senate might be stronger.

Another editorial above it, which I enjoyed for the headline alone (“Saving Speaker Ryan“), ended with this:

The Trump ascendancy is a dangerous moment for Republicans and conservative ideas. But unless the convention delegates in Cleveland stage an uprising and nominate someone else (see below), Mr. Trump or Hillary Clinton will be the next President. Those who want to preserve space for a better conservative politics should support politicians who share those beliefs, not engage in Trump-like purges.

The “(see below)” referred to other editorial, “High Trump Anxiety.” Again, the possibility of stopping him at the convention was only mentioned at the very end, but it’s interesting that the editors chose to conclude two editorials that way, and to call our attention to the fact.

Then there was the column by Holman W. Jenkins Jr., which said in part:

Happily, there’s still time for Republicans, at their convention, to replace Mr. Trump with someone else, though this will require continued help from Mr. Trump. But he’s working on it. On Monday, he ordered his staff to double-down on vilifying Judge Curiel. He said on TV that a hypothetical Muslim judge might also be unfit to preside. And when and if the Trump U cases proceed to trial before a jury, whole voting blocs (women) will be on the edge of their seats to find out if they’re disqualified because Mr. Trump previously insulted them.

All this offers a second chance for those prominent Republicans who, from party loyalty, misborn hopes for Mr. Trump’s transformation or a mistaken idea of their own populist bona fides, clambered aboard the Trump express….

Echoing the two editorials, he returned to that theme at the very end:

The Trump ascendancy is a dangerous moment for Republicans and conservative ideas. But unless the convention delegates in Cleveland stage an uprising and nominate someone else (see below), Mr. Trump or Hillary Clinton will be the next President. Those who want to preserve space for a better conservative politics should support politicians who share those beliefs, not engage in Trump-like purges.

Note that the Journal isn’t going out on a limb and trying to predict that something so unlikely might actually happen. But they keep mentioning it, just in case there’s someone out there (actually, it would take quite a few someones) with the guts to take the idea and act upon it…

6 thoughts on “WSJ still fantasizes about stopping Trump at convention”