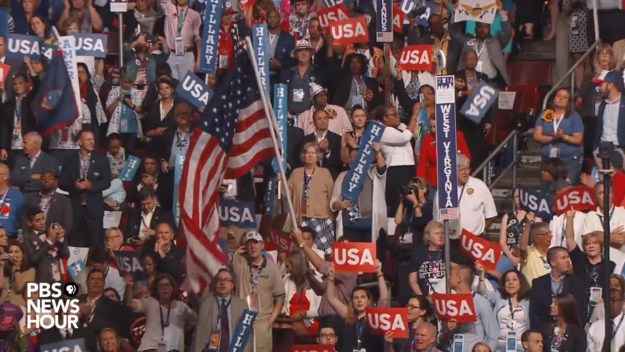 Boy, I could have done with having this convention some other week, when I’m not trying to have vacation. But them’s the breaks.

Here’s hoping I like Hillary Clinton’s speech better than I did this one back in 2008.

First step, please don’t say you’re going to “fight” for me. I hate that.

Another thing I hope she doesn’t do is talk like this is all a Democrats-vs.-Republicans thing, partisan business as usual. She knows better. The picture she must paint is one that reflects the reality that we’re facing: A choice between her, a fairly conventional center-left politician with very good credentials. (Not “the best ever,” as some would have it — she can’t beat a G.H.W. Bush or an Eisenhower — but very, very good.)

No, she has to reach out to independents like me, because she needs every one of us. She needs to reach out to all those Republicans out there who are deeply disturbed at what has seized their party’s nomination, and unfortunately have a problem with voting for her — a sort of Hillary Derangement Syndrome.

That takes some mighty reaching — stretching that might challenge Mr. Fantastic or Plastic Man. But she needs to do it. The country needs her to do it.

As David Brooks said a moment ago, her party has done a decent job seizing the ground that the GOP abandoned last week — the role of the patriotic party, the Morning in America party, even in a sense the culturally conservative party, in terms of embracing traditional American values.

She needs to close the deal. We’ll see.

If the internet keeps working — it’s been on and off today where I am — you’ll see my Tweets more or less in real time below, in the comments. If you just can’t wait a few seconds for them to show up here, here’s my Twitter feed…

68 thoughts on “Just this one more night, and we’re done! Live-Tweeting Hillary”