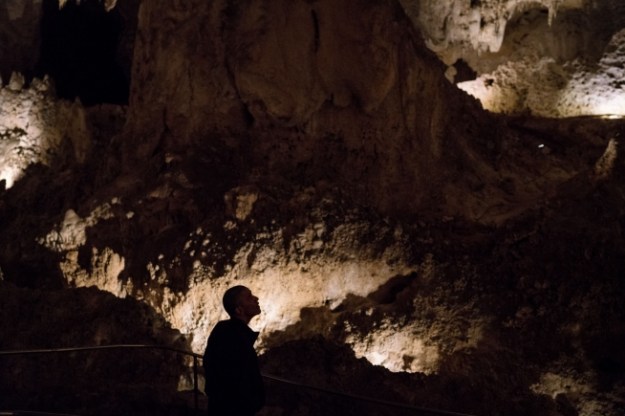 OK, so it’s really a picture of the president touring Carlsbad Caverns with his family last month, but it seemed to go with my headline.

Today, the Obama administration owned up to a number of bystanders killed a collateral damage in drone strikes:

The United States has inadvertently killed between 64 and 116 noncombatant civilians in drone and other lethal attacks against terrorism suspects in places not considered active war zones, the Obama administration said Friday.

The unintentional deaths came in a total of 473 CIA and military counterterrorism strikes up to the end of 2015 that the administration said have taken between 2,372 and 2,581 militants permanently off the battlefield in countries where the United States is not at war, which would include Pakistan, Yemen, Somalia and Libya.

The release was accompanied by an executive order, signed by President Obama, designed to give added weight to existing administration standards and procedures governing the use of lethal force and for limiting civilian casualties….

So. 473 drone strikes. At least 2,372 people regarded as enemies of the United States killed. And the tradeoff is as many as 116 folks who were minding their own business, snuffed out without warning by hellfire from the sky.

What do we think about that? Are the attacks justified? Is the tradeoff morally defensible? Can we rationalize killing an innocent person for every 20 terrorists?

The administration released this information in connection with the president’s promise to be more transparent about his “I’ve got a list” program of drone warfare.

By disclosing, he’s pulling us in, sharing the burden. Now that we know, it’s more on us. We, too, are walking about in a moral twilight. How do feel about that?

Are you familiar with the naval battle that occurred outside Boston Harbor between HMS Shannon and USS Chesapeake on 1 June 1813? Up to that point in the War of 1812, there had been several one-on-one battles between British and American ships, and the infant U.S. Navy had won all of them — which had really shaken up the Royal Navy. They were used to fighting the French, and always winning.

Philip Broke, commander of HMS Shannon, had been blockading Boston Harbor for months. He was low on water and other provisions and couldn’t stay on station much longer. But he didn’t want to leave without having had a chance to reclaim the Royal Navy’s honor against the Americans. So he sent a note into the harbor to Capt. James Lawrence of the Chesapeake, challenging him to come out and fight.

Lawrence did so that very day (although coincidentally, on his own initiative, not because of the note). And after a furiously intense 15 minutes of fighting in which 252 men were killed or wounded, Shannon had won. Lawrence, who was mortally wounded in the battle, famously said “Don’t give up the ship!” as he was taken below — but moments later, his men were forced to do just that. He died of his wounds three days later, as his captured ship was being taken to Halifax.

Broke, too, was gravely wounded. He survived, and was made a baronet for his victory, but his injuries ended his active service for good.

This story is told in vivid detail in one of Patrick O’Brian’s novels, The Fortune of War. As you know, I’m always trying to get everyone I know to read these books about Captain Jack Aubrey and his particular friend, surgeon Stephen Maturin, and I recently persuaded my wife to read this one.

To her, Broke’s note challenging Lawrence made no sense.

And yes, it does seem a bit irrational, like two boys meeting on a playground and saying simultaneously, “I can beat you!” and going at it. Boys who’ve heard too many stories about jousting knights in shining armor.

But there was a time when behavior such as Broke’s was universally lauded, held up as an ideal. And I confess I’m atavistic enough to feel admiration for him, while at the same time seeing that whole war as an absurd waste. (I contain multitudes.)

And I have to wonder: Was there not honor in inviting the enemy out to a fair fight, one in which the challenger’s life was on the line as much as anyone’s? A fight in which many were killed, but all were legitimate combatants? Are we better, more rational, more enlightened, more admirable now that we fight wars like this instead? 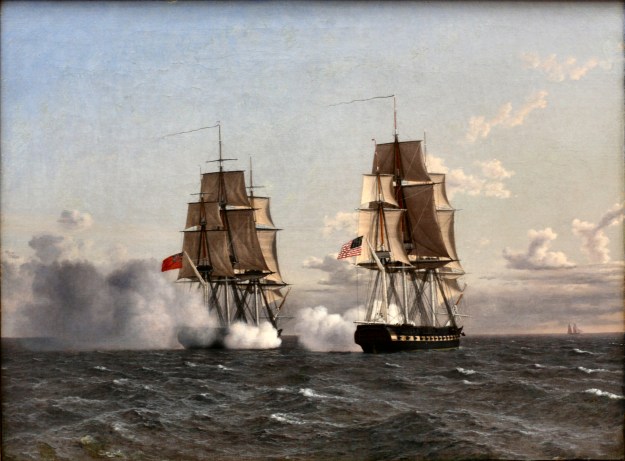 The initial exchange of gunfire between Chesapeake and Shannon.

55 thoughts on “Obama, groping through the moral twilight of drone warfare”