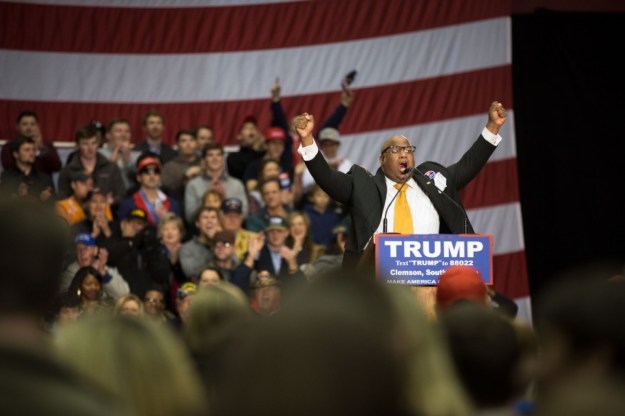 Pastor Mark Burns speaking at Trump rally in Greenville. Wikipedia says I should credit this to Debrareneelee “in the manner specified by the author or licensor.” But I was unable to find out exactly how to do that.

This is the most politicized and distasteful prayer I can imagine. God should sue the GOP for defamation. https://t.co/K35cSa2Gxl

I figured maybe Nicholas just doesn’t grok how evangelicals express themselves or something.

Then I read it, and cringed, because Kristof’s language had been too mild: 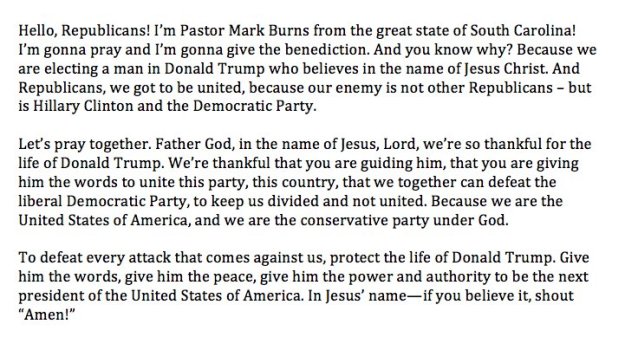 Oh, Lord, why do you let such people claim to represent you? Shouldn’t you have a licensing process or something? (Oh, that’s right — you did, but then the Reformation came along. Smiley face, Protestants! Just joshing you a bit — kind of.)

I just don’t know where to start. Perhaps we should just pick out the most offensive thing in this speech — I cannot call it a “prayer.” Is it Donald Trump being held up as a model of righteousness? Or is it that, in this country united by the holy words of St. Donald, “our enemy” is “Hillary Clinton and the Democratic Party?”

I can’t choose. Normally I’d pick the second thing, because you know that a pet peeve that is for me. But the other is so deeply, profoundly sacrilegious…

Or is the very worst thing the fact that he’s telling the world he’s from South Carolina?

32 thoughts on “The ‘pastor’ who offered this ‘prayer’ is, sadly, from South Carolina”