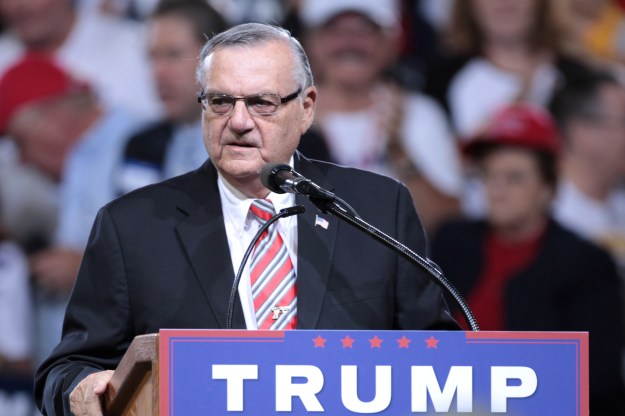 Photo by Gage Skidmore, via Wikipedia.

Speaking of Trump supporters… I don’t know this Sheriff Arpaio guy from Adam’s off ox, but this release from the state Democratic Party at least lets me know what is allegedly wrong with him.

SCDP STATEMENT ON JEFF DUNCAN AND MICK MULVANEY HONORING RACIST SHERIFF JOE ARPAIO
Columbia, SC – The South Carolina Democratic Party released the following statement today on the announcement by Rep. Jeff Duncan that racist Maricopa County, Arizona Sheriff Joe Arpaio will be a “special guest,” alongside Rep. Mick Mulvaney, at Duncan’s Faith & Freedom BBQ next Monday in Anderson:
“The fact that Jeff Duncan and Mick Mulvaney would honor a racist and sexist bigot like Joe Arpaio is disgusting, but given their support of a racist and sexist bigot like Donald Trump for president, it is not surprising.
“Pasted below is a list of 10 of Joe Arpaio’s policies, taken from a 2012 article by Ian Millhiser of ThinkProgress based on a U.S. Department of Justice legal complaint.  We are interested in hearing which of these policies Jeff Duncan and Mick Mulvaney believe are appropriate.”
1. Forcing Women To Sleep In Their Own Menstrual Blood: In Arpaio’s jails, “female Latino LEP prisoners have been denied basic sanitary items. In some instances, female Latino LEP prisoners have been forced to remain with sheets or pants soiled from menstruation because of MCSO’s failure to ensure that detention officers provide language assistance in such circumstances.”

2. Assaulting Pregnant Women: “[A]n MCSO officer stopped a Latina woman – a citizen of the United States and five months pregnant at the time – as she pulled into her driveway. After she exited her car, the officer then insisted that she sit on the hood of the car. When she refused, the officer grabbed her arms, pulled them behind her back, and slammed her, stomach first, into the vehicle three times. He then dragged her to the patrol car and shoved her into the backseat. He left her in the patrol car for approximately 30 minutes without air conditioning. The MCSO officer ultimately issued a citation for failure to provide identification.”

3. Stalking Latino Women: “In another instance, during a crime suppression operation, two MCSO officers followed a Latina woman, a citizen of the United States, for a quarter of a mile to her home. The officers did not turn on their emergency lights, but insisted that the woman remain in her car when she attempted to exit the car and enter her home. The officers’ stated reasons for approaching the woman was a non-functioning license plate light. When the woman attempted to enter her home, the officers used force to take her to the ground, kneed her in the back, and handcuffed her. The woman was then taken to an MCSO substation, cited for ‘disorderly conduct,’ and returned home. The disorderly conduct citation was subsequently dismissed.”

4. Criminalizing Being A Latino: “During raids, [Arpaio’s Criminal Enforcement Squad] typically seizes all Latinos present, whether they are listed on the warrant or not. For example, in one raid CES had a search warrant for 67 people, yet 109 people were detained. Fifty-nine people were arrested and 50 held for several hours before they were released. Those detained, but not on the warrant, were seized because they were Latino and present at the time of the raid. No legal justification existed for their detention.”

5. Criminalizing Living Next To The Wrong People: “[D]uring a raid of a house suspected of containing human smugglers and their victims . . . officers went to an adjacent house, which was occupied by a Latino family. The officers entered the adjacent house and searched it, without a warrant and without the residents’ knowing consent. Although they found no evidence of criminal activity, after the search was over, the officers zip-tied the residents, a Latino man, a legal permanent resident of the United States, and his 12-year-old Latino son, a citizen of the United States, and required them to sit on the sidewalk for more than one hour, along with approximately 10 persons who had been seized from the target house, before being released”

6. Ignoring Rape: Because of Arpaio’s obsessive focus on “low-level immigration offenses” his officers failed “to adequately respond to reports of sexual violence, including allegations of rape, sexual assault, and sexual abuse of girls.”

9. Random, Unlawful Detention Of Latinos: “MCSO officers stopped a car carrying four Latino men, although the car was not violating any traffic laws. The MCSO officers ordered the men out of the car, zip-tied them, and made them sit on the curb for an hour before releasing all of them. The only reason given for the stop was that the men’s car ‘was a little low,’ which is not a criminal or traffic violation.”

10. Group Punishments For Latinos: “In some instances, when a Latino [Low English Proficiency] prisoner has been unable to understand commands given in English, MCSO detention officers have put an entire area of the jail in lockdown—effectively preventing all the prisoners in that area from accessing a number of privileges because of the Latino LEP prisoner’s inability to understand English, inciting hostility toward the LEP prisoner, and potentially placing MCSO officers and other prisoners in harm’s way.”

40 thoughts on “Allegations against this Sheriff Arpaio guy”