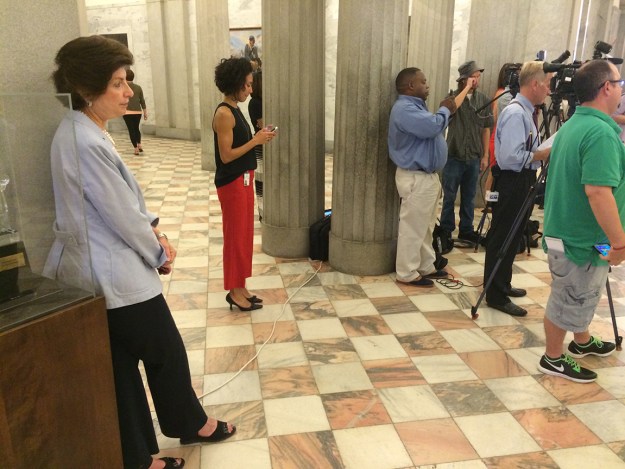 You hear tell of the advantage that incumbents enjoy over challengers in elections, and here is a prime example.

You’ll recall that Mia McLeod did the same alone on Monday, and got good coverage for it (Mia was not present today, but signed the letter along with three other lawmakers who couldn’t make it).

Looking very alone standing back behind the assembled TV cameras, watching the proceedings, was Susan Brill, Rep. McLeod’s Republican opponent in the race for the seat Sen. Joel Lourie is giving up.

She told me after that she agreed with what the lawmakers were doing: “I think their action is appropriate, and long overdue.” But the fact that she is not the incumbent, and therefore not a member of the delegation, relegated her to the status of spectator at the event.

Could she call a press conference of her own? Sure. Would it be as well attended as this one was, or as Mia’s was Monday? Probably not. They are legislators; she is not. She showed her interest by showing up, though. (Of course, Mia isn’t the incumbent in the particular office she and Susan are seeking, but she’s in the House, which is almost as good.)

I didn’t see any of the other media types talking to her afterward. They were busy talking to an employee of the commission who had attended and thanked the lawmakers (who I missed talking to because I was talking with Susan and the lawmakers). But I could have missed it…