The main narrative the last couple of days is that Donald Trump has essentially delivered the coup de grâce to his moribund campaign.

By demoting Paul Manafort — the guy who was trying to get him to run a serious political campaign and reach beyond his base of Trumpkins — and elevating the man from Bretbart, Trump was “doubling down,” betting it all that the loudmouthed nativist, populist approach that won the primaries for him was the way to go from now to Election Day.

And that, says conventional wisdom, means it’s all over for Donald J. Trump. His campaign is finished. Liberal pundits are celebrating the inevitable.

But what if he’s faking them — all of us — out? What if he’s getting us all to look in one direction — at the disarray in his campaign, underlined this morning with Manafort’s resignation — while he moves in a wholly new direction, one that could lead to victory?

After all, while everyone’s focusing in horror on Breitbart’s Stephen K. Bannon, the new campaign manager is in fact GOP pollster Kellyanne Conway, who is more someone you might characterize as the pro from Dover — someone who can read the numbers and knows how to speak to women, which Trump could use help with, to say the least.

Look away, for a moment, from the apparent train wreck of the Trump campaign, and see what he’s actually doing out there on the campaign trail.

Look at what happened Thursday night: “At a rally in North Carolina, Trump gave a speech that was the sort of speech that presidential candidates give, not the sort that Donald Trump gives.” It involved a teleprompter. It involved sticking to script. It involved doing those things that Manafort had been trying to get him to do, and which supposedly, he just decided to utterly reject.

And this was not just a one-time thing: “Thursday marked Trump’s third teleprompter speech since Monday, a departure from his typically free-wheeling campaign rallies.”

So he has head-faked in one direction — “Let Trump be Trump” — while his body has moved in the direction that offers his only chance of winning the election.

Perhaps most telling of all, in that speech Thursday night just up the road in Charlotte, he did the unthinkable, by Trumpian standards:

CHARLOTTE — Donald Trump on Thursday expressed regret over causing “personal pain” through ill-chosen words he has used “in the heat of debate,” an unexpected and uncharacteristic declaration of remorse for a candidate whose public persona is defined by his combative and bombastic style…

Don’t believe it? See the video above.

This shift has not gone unnoticed by every player on the court. Philip Bump of The Washington Post has picked up on it. To quote more fully from a piece I quoted partially above:

On Thursday night, 106 days since his last opponent dropped out of the Republican primaries, 28 days since he accepted the nomination and 82 days until Election Day, Donald Trump started running for president.

This is sort of an exaggeration, but only sort of. At a rally in North Carolina, Trump gave a speech that was the sort of speech that presidential candidates give, not the sort that Donald Trump gives. Speeches are one of the three ways that Trump gets himself into trouble (the other two being interviews and Twitter) so let’s not get too crazy assuming that Thursday-night-Trump is here to stay. But just in case he is, it’s worth planting a flag on where the race was when this change (however fleeting!) was made….

As Mr. Bump notes, if this is the start of a Trump comeback, he has a long, long way to climb.

But still. Must give us pause. And maybe we should stop focusing so much on the inside-baseball stuff, obsessing about what’s happening in the front office, and notice what’s actually happening out there in the game… 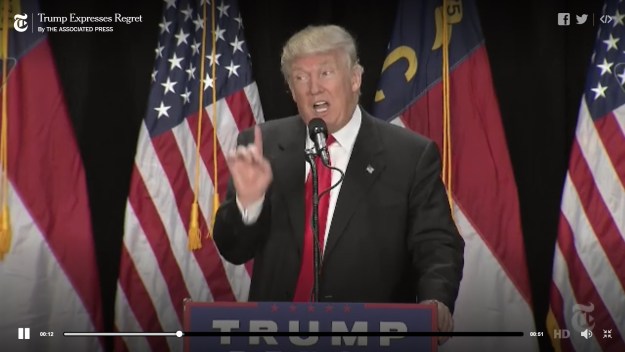 59 thoughts on “Did Trump just head-fake us into looking the wrong way?”