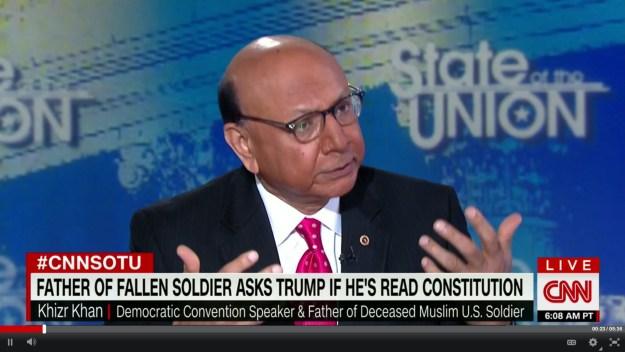 OK, vacation’s over and I’m back in the saddle, and we are in mid-outrage over the latest deeply offensive nonsense from Donald Trump. And, as is so often the case, the most pointed criticism is coming from leading members of the party that nominated him week before last for POTUS:

Already, the party’s leaders in the House and the Senate have distanced themselves from Trump’s remarks, and other Republican figures are attacking their nominee forcefully.
Sen. John McCain issue a very personal statement Mondaay blasting Trump’s comments about the Khans and paying homage to their son Humayun’s sacrifice. McCain noted that his son also served in the Iraq War and the McCains have been serving in the US military for hundreds of years.

“It is time for Donald Trump to set the example for our country and the future of the Republican Party,” McCain said. “While our Party has bestowed upon him the nomination, it is not accompanied by unfettered license to defame those who are the best among us.

“Lastly, I’d like to say to Mr. and Mrs. Khan: thank you for immigrating to America. We’re a better country because of you. And you are certainly right; your son was the best of America, and the memory of his sacrifice will make us a better nation — and he will never be forgotten.”

Sen. Lindsey Graham, R-South Carolina, said in a statement: “This is going to a place where we’ve never gone before, to push back against the families of the fallen. There used to be some things that were sacred in American politics — that you don’t do — like criticizing the parents of a fallen soldier even if they criticize you.”

“If you’re going to be leader of the free world, you have to be able to accept criticism. Mr. Trump can’t,” Graham said. “The problem is, ‘unacceptable’ doesn’t even begin to describe it.”…

As I noted last week (you’ll recall that I did spend most of my evenings blogging despite being on holiday, because I’m just that kinda guy), a lot of the Democratic Convention consisted of fare and themes we normally get from the Republicans — upbeat “Morning in America” patriotism, appeals to fundamental, traditional American values and the like.

Which has to be eating at Sens. McCain and Graham almost as much as anything else. Their values used to be what their party was all about. In recent years, that’s been changing, as ideological loonies have been squeezing them out. It was happening already in 2008, which is why I wrote this column, “Give me that old-time conservatism.” In 2012, the “base” (can an insurgency be called “the base?” Oh, yeah, I guess it can) reluctantly settled for the sane Mitt Romney after spending much of the primary season flitting from one extreme to another.

And this year, of course, it went screaming off the rails, which is why people such as McCain, Graham, Romney, John Kasich and the Bushes did not attend their party’s convention.

25 thoughts on “Graham, McCain on Trump and the Khans”