In this case, I had — in the interest of using words economically — referred to myself as a “centrist,” as I frequently do. Both Bud and Harry Harris took exception to the reference.

Dang, dang, dang! I wrote this somewhat involved, extremely insightful comment a little while ago on my iPad, and lost wifi in the middle of saving it. Let me see if I can reconstruct…

Of course I’m a centrist, to the point that the term has meaning (more on that in a second). I’m an adherent of the postwar governing consensus, the area that Clinton and Blair tried to get us back to in the 90s. I disagree with those who would pull us way from it.

That said, “left,” “right” and “center” are fairly silly terms. I really don’t HAVE a comfortable place on the artificial left-right continuum, and trying to place me, or anyone who THINKS about issues rather than buying them off the shelf prepackaged, on that line can present problems. But since I’m not “left” or “right,” “center” is a convenient term to use.

It’s also convenient because I am for CORE values, not those on the fringes. Here’s what I mean by that…

Government is about solving problems together, or at least efficiently providing those basic functions that we have general agreement government should handle. So I’m interested in areas where the parties overlap, not the areas where they pull away from consensus. We need to identify and build upon those areas where we can work together. And if we get good enough at that, maybe we can branch out to some of the tough subjects.

For that reason, I generally don’t like dealing with Culture War stuff, and get upset when it looks like an election is going to be about such things. Bud says, for instance, he assumes I “still advocate” for traditional marriage. I wasn’t aware I HAD been advocating on that subject. At all. He also mentioned Blue Laws. At one point some years back I made a gentle, passing reference to the fact that opposition to blue laws is one of the sillier overinterpretations of the 1st Amendment’s Establishment clause. Having a sensible agreement to have a day without commerce and hustle-bustle is hardly thrusting a particular form of religion on anyone. It’s just a gesture to basic human sanity. And I say that whenever Doug and Bud bring it up, which they do a LOT, because such a sensible suggestion is DEEPLY offensive to their libertarian reflexes. But I can’t recall advocating or campaigning for such. The most I’ve said is that it’s a shame to see such a life-calming custom go away.

Seriously, when I start campaigning for something, everyone can tell. (See: Confederate flag.)

But back to my point — I don’t see it as productive to invest a lot of political capital in those things, because the fights over them drive us apart and make it harder to agree on the things that should be easy.

The problem these days is that the parties and associated interest groups have polarized us so much that the area of consensus has gotten smaller and smaller.

Bud thinks this is a GREAT year. Well, in a couple of ways it is, but not the ways he thinks.

First, among thoughtful, informed participants and observers, there’s a greater willingness to step out from the stupid left-right, Democratic-Republican dichotomy and consider candidates on their merits. Once people do that, you see the Bushes (whom Bud despises so much), Graham, Sasse, Romney, et al., distancing themselves from Trump or opposing him outright. The latest encouraging manifestation of that is Meg Whitman declaring for Hillary, and the formation of a PAC to encourage Republicans to vote for the lesser of two weevils.

Sure, there are still plenty of Republicans out there who think this is a normal, left-v.-right election and anyone who would support anyone but Trump is a liberal Democrat and therefore the enemy. But I prefer to celebrate the people out there who GET IT.

Also, with Trump as their standard-bearer the GOP has so abandoned the flag-and-country ground that the Democrats were able to co-opt it and position themselves as the party of traditional patriotism last week. In other words, the Dems celebrated the things that used to unite us all, rather than just concentrating on differences (the usual Identity Politics and class warfare stuff).

Of course, this deeply offended the centrifugal forces of our politics, who want to see us fly apart. For instance, Gen. Allen’s speech offended both the military-hating portions of the left and the Democrat-hating elements on the right.

But these are positive developments, to a “centrist” like me… 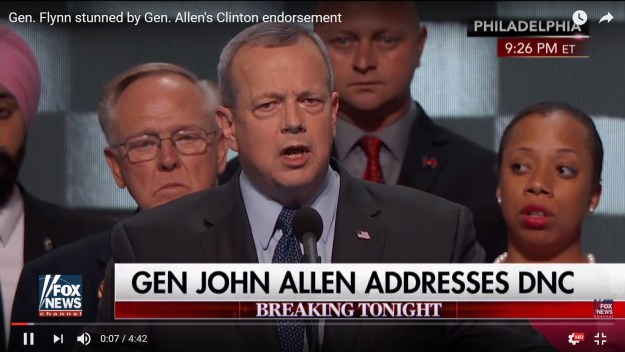