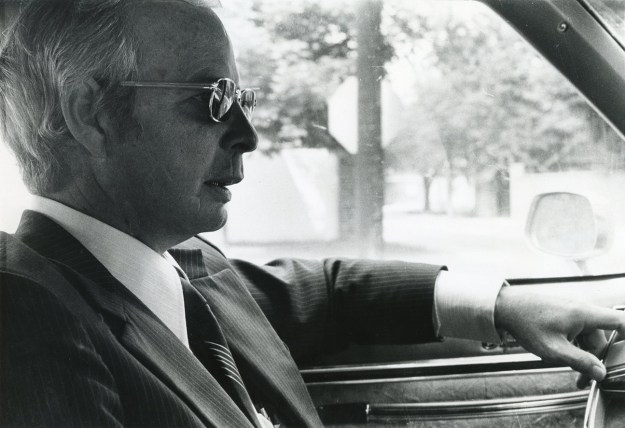 Roger Murray at the wheel in 1978. As the complete journalist, I did my own photography, of course.

When I was a young and inexperienced reporter at The Jackson Sun in 1978, I spent a few days covering Roger Murray, who was seeking the Democratic nomination for governor of Tennessee.

It was an immersive experience, one that would seem quite alien to reporters today. I went on the road with him for several days as he traveled across Middle and East Tennessee. (For those of you not familiar, we speak of the Three Great States of Tennessee, and Jackson was located in the middle of West Tennessee.) And when I say “on the road,” I mean something more reminiscent of Kerouac than a typical political campaign.

I rode with the candidate himself, who drove his own car. I was on my own for finding places to spend the night, which wasn’t easy in some of those small towns. One night, I nearly had to double up with the woman from The Commercial Appeal who had joined us in the car for part of the trip. At least, she offered — in a matter-of-fact, platonic way. I must have looked particularly lost. But I managed to get a room of my own.

When on the road like that, I’d write out my story each night for the next day’s paper in my notebook, call it in and dictate it first thing in the morning (it was an afternoon paper), and call in updates and new ledes — from pay phones, of course — before each of the two editions. At one point on this trip, Roger asked if he could read what I’d written for that day (in those days before the web, children, he wouldn’t see the paper until we got home days later), so I handed him my notebook. He read it while driving down a two-lane highway, which I’ll have to tell you was a bit unnerving.

But Roger was like that. He was a bustling, charge-ahead, multitasking kind of guy who operated on full speed whether he was legislating in Nashville or running his business — a private security company — back in Jackson. He had made something of a name for himself chairing hearings looking into the shady doings of Gov. Ray Blanton, and he was trying to parlay that into a shot at the governor’s office. 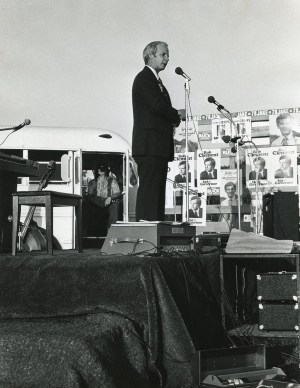 Speaking at a Democratic rally somewhere east of Nashville. I think this was the rally at which I first met Al Gore. Note all the Butcher and Clement posters.

And inside the bubble — going everywhere he went, seeing everyone he saw — it felt like it was working. There had just been a televised with the other four or five candidates running, and everywhere we went — Democratic party rallies, factory shift changes, talking to loafers sitting on benches around a sleepy small-town courthouse — people said he had been the one who made the most sense. Which made me think that meant they were going to vote for him. But I should have listened to the few who said, “You made the most sense, but I’m going to vote for Jake Butcher or Bob Clement.”

I dismissed those who said things like that, because what they were saying was irrational. But they were the ones telling the truth. I did not yet understand two things about politics: One, voters don’t necessarily vote rationally. Two, the bandwagon effect: Clement and Butcher were seen as the two front-runners, and some people were going to vote for them simply for that reason.

I forget how much of the vote Roger got in the primary, but he came in well behind Clement and Butcher. (Butcher won the nomination, and went on to lose the election to Lamar Alexander.)

I found it shocking. Caught up in the bubble of my first gubernatorial campaign, I had thought he made the most sense, too. That was his slogan, by the way: Murray Makes Sense

Yeah, I know. I’m digressing all over the place. But I’m coming to the point.

A few days after this foray onto the campaign trail, we were visiting my in-laws in Memphis and I was telling them about my adventures on the hustings. My father-in-law, who had a more realistic impression of Murray’s chances than I did, offered the opinion that Murray was just running to raise his profile for the good of his business.

I found that a shocking idea. It seemed dishonest to me, and I didn’t see Roger as a dishonest guy. To my father-in-law, it just made sense. He, too, was a businessman. In retrospect, I’ve had occasion to think he may have been right. Roger was older and more experienced than I (which didn’t take much), and I’m sure had a much more realistic idea of his chances than I did. And whether he intended it or not, the campaign did raise his profile a bit, and may have helped his business. If I remember correctly, not all that long after, he left public office.

Which brings me to my point.

Friday morning, I heard a segment on The Takeaway suggesting that maybe Donald Trump’s whole candidacy has been a business move — something that would not shock me nearly as much as what my father-in-law said about Roger Murray, back when I was so much younger and more naive:

It’s no secret that Donald Trump is in a tough spot heading towards the November general election. Projections from FiveThirtyEight and our partners at The New York Times have former Secretary of State Hillary Clinton commanding a serious lead over the Republican presidential candidate.

So when Trump recruited Stephen Bannon of Breitbart News Network, the conservative alt-right website, as his chief campaign executive this week, it was a perplexing strategy. If you’re failing to attract mainstream voters, why further align yourself with the margins of the right wing?

Sarah Ellison, a contributing editor at Vanity Fair and author of “War at the Wall Street Journal,” suggests that Trump — understanding that a loss in November is imminent — has ulterior motives post-election: To create his own conservative media empire.

This I could believe, especially with Trump. It would explain a lot — such as his running like a guy who wants to make a big splash (to build the brand), then lose.

If, of course, all that trying-to-lose stuff wasn’t a fake. 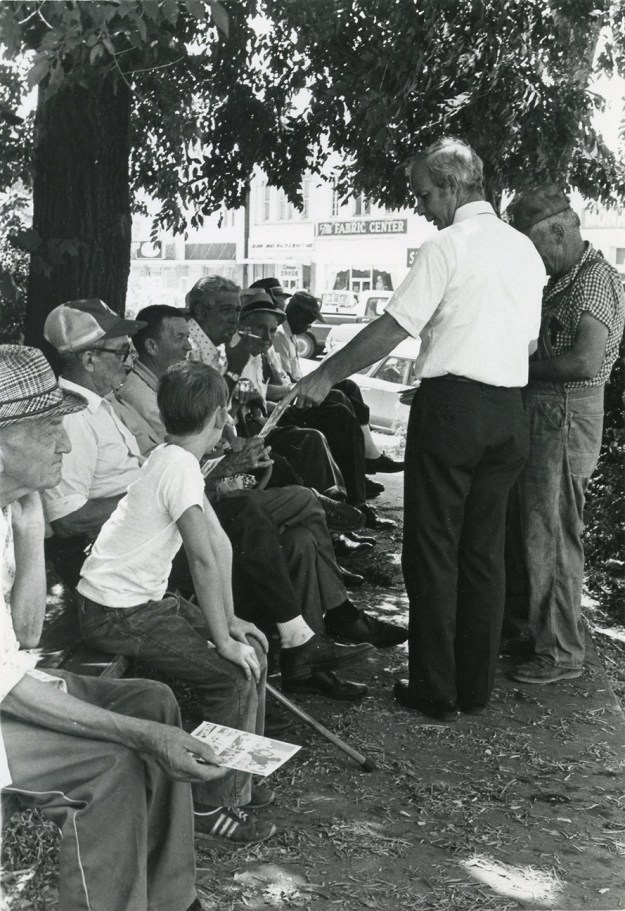 A classic old-school campaign shot: Murray works the courthouse square in a small town in Middle Tennessee, greeting the loafers — that classic Southern stereotype — and handing out leaflets.

11 thoughts on “Is this whole campaign just a business move for Trump?”