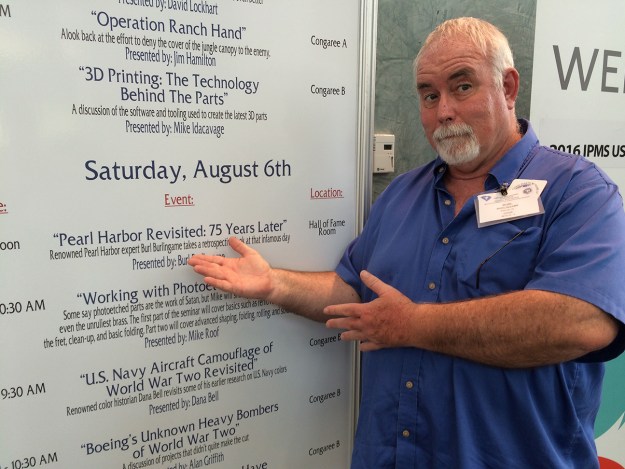 Burl is making sure we notice that the sign says he is “renowned.”

So you built a few model planes when you were a kid. A Spitfire, a P-51, an Me 109 — if you had the room, maybe a B-17. You glued all the pieces in the right places, applied the decals, even painted them. If you were like me, you heated the point of a needle and poked staggered machine-gun holes in the wing or fuselage.

And to top it all off, you got some fine plastic fishing line and hung them in mid-dogfight from the ceiling of your bedroom.

No model you ever built or even saw in your life can possibly compare to what’s on display right now at the International Plastic Modelers Society 2016 National Convention & Contest at the Columbia Metropolitan Convention Center.

I’m confident in saying that because these guys are the best in the world — the guys who make models for museums and for the movies (I ran into a guy who made models for one of the Star Wars movies) and the detail and realism of their work will take your breath away.

I learned about it because one of the featured attractions is my high school friend Burl Burlingame, ex-newspaperman and present historian at the Pacific Aviation Museum on Ford Island in the middle of Pearl Harbor.

In fact, he will be leading a seminar entitled “Pearl Harbor Revisited: 75 Years Later” at the convention center Saturday morning at 8:15. You should go try to catch it. Burl is an expert on so many things it’s ridiculous. Not just aviation — he’s the world’s leading authority on Japanese midget submarines. And he designed some of the more amazing stuff on display at the convention — such as unbelievably tiny brass railings for model ships, etched by a process that I do not understand.

And stay to look at the models. It costs $10 to get in ($15 for a family). And if you want to do more than look, and aren’t too intimidated by what you see to ever try building another model yourself, there’s every kind of kit conceivable for sale, from the Revell kits you bought from the dime store as a kid to specialized products for customizing at the professional level — everything for painting, muddying, rusting or whatever else you might want to do to emulate real life.

There are vintage dime-store kits on sale for as little as $5. But if you’d like to buy the new Do 335 A-O Pfeil kit unveiled just this afternoon by Zoukei-Mura (they had a whole team there from Japan; one rep Burl and I talked with kept bowing to us while we chatted), that’ll set you back about $185.

And no, it’s not just airplanes. There are cars, tanks, ships, every kind of military vehicle on wheels, fantasy figures, anything you can think of from Star Wars, and even a display of that monster series Aurora put out in the ’60s (I remember building the Dracula model, and there it was).

And while most of the models are small, this confab is big — I’ve never seen one event take up pretty much all of the Convention Center like this, upstairs and downstairs. (And yet, the modelers tell me there’s an event that happens in England that’s three times as big.)

So you should check it out. Saturday is the last day.

Here are some pictures. Forgive the crudity of these model… pictures. The smallness of the subjects, and the white background on the tables, made it tough for my iPhone: 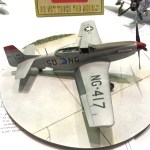 Burl spotted flaws on this model. I could not. Neither could you. Note the grass at the edge of the circular bit of “runway.” 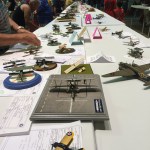 Just one of many tables in multiple rooms, upstairs and downstairs. This ballroom was for the competition. 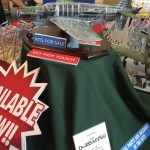 This is the new Do 335 model unveiled by Zoukei-Mura Friday. Note that this quirky German fighter had propellers at both ends. 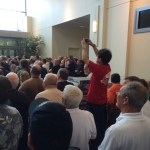 This was during a drawing staged by Zoukei-Mura. The Japanese guy taking the picture was part of their team, doing social media for the event. 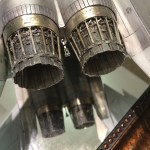 The lens on my iPhone can’t do justice to the detail. But every wire on these afterburners is there. Note how the metal is painted to look singed. 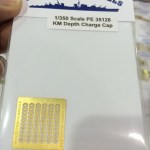 Speaking of detail. This is a photo-etched kit of real brass caps for the depth charges on your model destroyer. Really. This vendor was also selling brass railings designed by Burl. 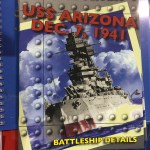 One of Burl’s books, on display in the vendor area. 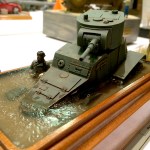 This was Burl’s entry in the competition. It’s a scene from the border conflicts between the Soviets and the Japanese in the late ’30s. The water the vehicle is bogged down in took 8 layers of acrylic. Note the ripples. 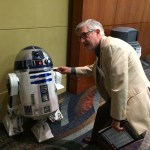