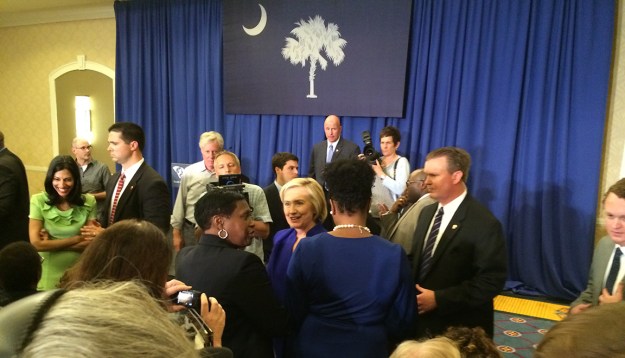 A face in the crowd: Who knew, when she appeared here in May 2015, she’d be so close here now?

Seeing Hillary Clinton only 2 percent behind Donald Trump — just within the 2.7 percent margin of error, making this a dead heat — is something most of us doubted we would see again in our lifetimes. (Jimmy Carter was the last Democrat to win here, in 1976.)

But what’s truly shocking, to me, is how much support Trump does have:

The closeness is a function of Democrats being a lot happier with their party’s candidate than Republicans are with theirs. Clinton is winning 84% of the Democratic vote, compared to Trump’s 77% of the Republican vote. Although neither candidate is well liked by voters in the state Trump’s favorability, at 38% positive and 56% negative, comes in slightly worse than Clinton’s at 38/55…

That’s right, 77 percent — an overwhelming supermajority — of Republicans are willing to vote for Trump. Only 4 percent of them — less than the percentage ready to throw away their vote on Gary Johnson — is willing to back Hillary.

Perhaps that doesn’t surprise you. If it doesn’t, I think that’s because you’re making the mistake of thinking of this as a normal election, just another standard-issue contest of Democrats vs. Republicans, in which Republicans should be expected to back their nominee as a matter of course.

To that I say, stop trying to normalize this election! There is nothing normal about it! There hasn’t been since a year ago, when Trump started outpolling actual, normal Republicans!

If an actual, sane Republican were the nominee — Bush, or Kasich, or maybe Christie before he sold out and backed Trump — then fine. I wouldn’t like that mindless, reflexive vote for the party any more than I usually do (regardless of the party), but at least it would be something we’ve come to expect as normal.

This is not. This is inexcusable, unthinkable. It is an abomination.

But you know what is worse? That Trump has a bigger lead over Hillary among those who are “independent or identifying with another party” than he does among the overall electorate!

I’m sure that doesn’t include any of you loyal UnPartisans, but still. It’s shocking…